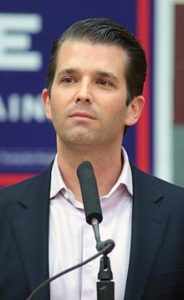 “Social media users took delight in ridiculing President Donald Trumps oldest son on Saturday after he posted a bizarre picture of his father on the Internet.

Sharing a fake Time Magazine cover photo to Instagram, the post shows the commander-in-chief depicted as a superhero reminiscent of Superman.

The image also depicts the President with a long golden beard with a `T` instead of an `S` emblazoned across his chest.”

It seems Junior shares his dad`s penchant for posting nonsense on social media and his love for fake Time Magazine covers.

Donald Trump Jr. may see his father as a Superman, but the rest of the world sees him as an arch-villain, such as the vengeful demon Pumpkinhead, that Superman would utterly destroy.

The fake Time Magazine cover depicts the Trump superhero with a long golden beard. I doubt the real Donald Trump can grow more than a wispy goatee, but if he had a long beard, it would certainly be golden because his sidekicks would be harlots who would always be satisfying his need for golden showers.

If you are a fan of the Superman franchise, I beg you don`t click the link at the bottom of this page! You will never want to see another Superman movie!

See the hideous image for yourself, if you dare! http://www.dailymail.co.uk/news/article-5003983/Donald-Trump-Jr-posts-bizarre-photo-father.html#ixzz4wExjSICs