You finally meet your Tinder date and you are appalled to discover it’s Kellyanne Conway, your testicles shrivel, your eyes turn glassy and you swear on your mother’s grave that you will never swipe right again.

Then after a few drinks the clock strikes midnight, and she turns into the Crypt Keeper and starts uttering racist garbage and you determine to sue Tinder if you survive your date from hell.

Kellyanne is trending on Twitter because in a Fox News interview she uttered this patently ridiculous statement:

“I worked in that White House for four years. We never even heard of a such of a thing. There was no supply chain crisis”

Conway is stuck in a twilight zone where alternative facts are accepted as Gospel. No supply chain crisis during the Trump administration? Really? Bitch, please!

Conway the Crypt Keeper is really more like Freddy Krueger or any of those movie monsters who are seemingly invincible, who keep coming back from the dead to terrorize a new generation of clueless teenagers.

Conway please just shut up; I don’t ever want to see you trending on Twitter again. 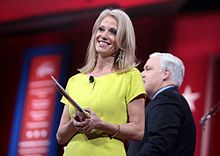 “Kellyanne Conway on Monday condemned the trend of anti-religiosity in America, just days after a mass shooting at a Pittsburgh synagogue left 11 people dead and several wounded.

`The anti-religiosity in this country, that it is somehow in vogue and funny to make fun of anybody of faith, to constantly be making fun of people who express religion, the late-night comedians, the unfunny people on TV shows, it`s always anti-religious,` Conway said on `Fox & Friends.`

She later argued that faith can bring Americans together and said this isn`t the time to be `driving God out of the public square.`”

Conway would be well-advised to consult a dictionary before spouting off on Fox News. Most folks, people of faith and atheists, are anti-religiosity. The word “religiosity” has a bad connotation, denoting a person who is excessively, obtrusively, or sentimentally religious.

However, it`s true that there is an anti-evangelical trend in America, in reaction to white evangelicals who have made a mockery of Christianity by embracing a degenerate who is a hell of a lot more similar to the anti-Christ than Jesus Christ.

I`m more liberal than conservative but I don`t make fun of people of faith who proclaim and defend the universal concepts of the brotherhood of man, and respect for individuals regardless of their ethnicity, religion, or social class.

I do make fun of white evangelicals who claim to believe in the teachings of Jesus Christ while worshipping a buffoon who is the antithesis of Christianity.

Faith in our democracy and in the Constitution can bring Americans of all faiths and no faith together, and the deity of your choice can best be worshipped in your home or in a place of worship, not in the public square.

When asked on Sunday by the Bergen Record about Trump`s unfounded claims that President Barack Obama wiretapped Trump Tower before the election, Conway had responded by suggesting that microwaves could be used for surveillance purposes.

In a live televised interview that lasted over 20 minutes on CNN on Monday morning, Conway appeared to slightly walk back her statement, saying she was “not Inspector Gadget” and didn`t think people used microwaves to spy on the Trump campaign.”

In the interview with the Bergen Record Conway asserted that there are microwaves that turn into cameras, “that is just a fact of modern life” she added for emphasis.

In an alternate universe where alternative facts are the norm, there may very well be microwave ovens that turn into cameras, but in the very real universe where we live, I`m not going to put on a clean shirt in case my microwave oven decides to take a pic of me when I nuke my popcorn.

But even the smartest person in the world will come across like an idiot trying to explain or justify Trump`s perplexing tweets.

Trying to decipher what a Donald Trump tweet means makes as much sense as trying to explain what a Trump wet fart means in a geopolitical sense.

“Social media erupted Monday night after Kellyanne Conway, a White House senior adviser, was pictured kneeling on the Oval Office couch to snap a photo of President Trump with leaders of the nation`s historically black colleges and universities.”

If Donald Trump`s young son Barron was in the Oval Office while his father was meeting dignitaries he would have the decorum, manners and respect to sit up straight.

Kellyanne Conway was casually sitting with her knees tucked under her on the couch, playing with her phone, while Trump met with leaders from historically black colleges and universities.

Conway`s lackadaisical posture was an insult to her boss, and and affront to the black educators. If Trump met with white leaders from community colleges and vocational schools, Conway would have been sitting like a proper lady, not like a wanton floozy.

A picture is worth a thousand words, and this image speaks volumes about Conway`s white privilege and disdain for black leaders.

Unlike the Bowling Green Massacre this is a real news item, and Conway should be summarily fired by the president of the United States.

Pic of Conway siting like a slut in the Oval Office:

Since 1998 I`ve posted thousands of articles online, and this is the first and last time I will write a fashion essay. Fashionista I`m not.

Kellyanne wore a $3,600 double-breasted Gucci coat that had social media in a tizzy; she was compared to Paddington Bear, Napoleon, a nutcracker, and Yankee Doodle`s bride.

It takes real balls to wear such an extravagant outfit; Kellyanne must tote a bowling bag to carry her balls.

A woman with confidence turns me on, even though Kellyanne is well past her prime, I would knock boots with the patriotic hottie in a New York minute.

Kellyanne was basically telling her haters: I`m down with “America First” and “Make America Great Again,” and if you don`t like it you can kiss my red, white and blue ass.