After a mob festooned with Trump regalia stormed the Capitol, waving a Confederate flags in the people’s house and committing multiple acts of vandalism and violence, Facebook and Twitter finally suspended President Donald Trump from posting on their respective social media platforms.

Trump’s treasonous act of inciting the MAGA crowd to lay siege to the Capitol was the final straw for the social media behemoths.

Trump was a social media menace before he became president, and he only ramped up his racist and seditious posts during his four-year term. For four interminable years Twitter and Facebook gave the inciter-in-chief free reign to spread his Gospel of violence, hatred and intolerance.

Facebook and Twitter allowed the traitor-in-chief to exploit their platforms to spread his conspiracy theories, blatant lies and racist garbage under the guise that political leaders enjoyed a special dispensation to run roughshod over their rules and standards because it was important for the public to know what they are thinking.

In hindsight it was a huge mistake for social media sites to allow Trump to post messages condoning, indeed inciting violence. This despicable excuse for a human being must be banned for life from Twitter, Facebook and every other social media platform. 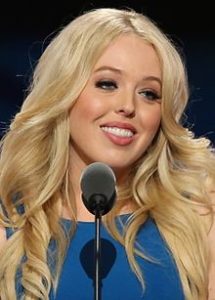 “Tiffany Trump posted an inspirational quote from Frank Ocean on Instagram last week, but it just so happens that there`s no record of him ever saying it.

As the majority of America sat down for Thanksgiving meals on Thursday, the 24-year-old daughter of Donald Trump and Marla Marples instead opted to share a video of their studies at Georgetown College, where she is currently enrolled as a law student.

“Work hard in silence, let your success be your noise – Frank Ocean,” she captioned the video.

But it soon emerged that there`s no actual evidence of Ocean ever uttering the heartfelt sentiment, and it`s instead the latest piece of what her dad might refer to as `Fake News`.

Tiffany Trump is the least disliked member of the Trump clan, simply because we rarely hear a peep or a tweet out of her.

On Thanksgiving Tiffany posted a video on Instagram of her studies at Georgetown College, and she captioned the video: Work hard in silence, let your success be your noise – Frank Ocean

I doubt that Tiffany is familiar with the music of the openly gay R & B crooner, she probably just thought that invoking the name of the soul singer would lend prestige to her stupid video.

Tiffany would be wise to follow the advice of the faux quote, namely to work hard in silence. Tiffany dear, we hate your father and your brothers with a passion, because they are always tweeting nonsense. For the love of God please stay out of social media, or we will despise you as much as we do them.

Every day we`re bombarded with fake news from your idiot father, the last thing we need is one more member of the Trump family spreading fake news. 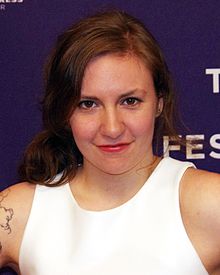 “The 30 year-old took to Instagram to share this intimate moment with her 2.8 million followers.
In it, she is seen posing with her thighs slightly ajar and her hands between her legs in a suggestive gesture, as she (presumably) relieves herself and flushes away her sorrows about Donald Trump.”
HeatStreet

Lena Dunham is the creator, writer, producer and lead actress of the HBO series “Girls”, no image makes it on air without her approval. On every episode Dunham offends our aesthetic sensibilities by exposing her blotchy fat ass. It’s one thing to appear butt-naked occasionally as an affirmation of body acceptance, it’s quite another to appear nude on every episode, that’s a sign of vanity and hatred of viewers.

Dunham has taken exhibitionism to a new level, her toilet selfie is disgusting; I wish I could flush the big ugly turd down the toilet.

Recently in a drunken video rant on Instagram Dunham referred to herself as a “human wastebasket” — indeed she is. Apparently only when Dunham is drunk does she see herself as she really is, the next time she gets plastered I hope she make an appointment with a shrink or a minister.

Dunham is an ugly girl desperate for attention, her serial flashing on “Girls” lost its shock value, so now we are treated to a toilet selfie. Will this moral slide end with a snuff film starring herself?