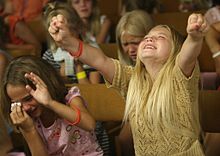 The agitprop movie director has said and written a lot of provocative things in his career, but this meme is fairly tame and it recirculates every year during the Christmas season.

In this bitterly divided nation the left-wing filmmaker`s innocuous message has received a strong reaction on social media. The post has accumulated almost 40,000 likes, 10,000 shares and 1,000 comments.

Now it`s my turn to give you my two cent`s worth of commentary. I strongly agree with Moore`s sentiments, I`d settle for white evangelical Christians putting Christ back in Christians.

White evangelicals have so perverted Christianity that they should be labeled a hate group by the Southern Poverty Law Center. I don`t recognize the humility, mercy and compassion of Jesus Christ in the behavior of white evangelicals who demonize gays and lesbians, countenance racism and bigotry, treat women like second-class citizens and display seething hatred of immigrants and minorities.

I could never be persuaded to take up arms against al-Qaeda or ISIS in Afghanistan or Iraq, but I will gladly take up metaphorical arms against white evangelicals in America.

White evangelicals are the greatest threat to democracy and freedom and we can`t idly wait for the Almighty to smite these reprobates, it is incumbent upon us to wage war against them until their pernicious ideology is discredited and defeated.

I`m going to help put “Christ” back in “Christmas” by kicking these religious fascists to the curb.