“How can you go to church and pray when you’re wearing a mask? Do you think God can hear your prayers through a mask?”

Thoughts and prayers are as effectual as farts and belches in fighting the coronavirus pandemic.

Preachers, pundits and politicians are wasting their time imploring the Almighty to end the plague.

Influencers would be well-advised to appeal to the better angels of human beings and not the benevolence of the Supreme Being if we are to win the battle against COVID.

Mask up! Get vaccinated! Social distance! Avoid Crowds! These are simple actions that we can take to once and for all end the pandemic.

Jim Bakker has less faith in the power of the Almighty than a backslidden believer; he thinks a mask can prevent an omnipotent and omniscient from hearing prayers.

Of course, Bakker is an evangelical showman who makes a Hollywood production out of praying: Yelling his entreaties at the cameras in hopes of eliciting donations and showing off his virtuoso as a prayer warrior.

I’d rather suffer through a root canal than listen to Bakker, but if I were at public building where he was on TV preaching his tomfoolery, I would take off my mask and use it to stuff my ears.

For only $45 you can establish a point of contact with God via a gold-plated coin engraved with President Trump and King Cyrus’ faces — according to the ‘Jim Bakker Show’ at least. The coin is being peddled by Lance Wallnau, who claims God told him people need it to pray for Trump. ‘When I asked the Lord, ‘Why the coin?’ he said ‘Because when you take the coin, it’s a point of contact,’ Wallnau said in the recording. ‘So your faith is being released with a million other believers to pray protection and peace and wisdom and counsel over the president of the United States and over his family.’

You don’t need a material object, much less a 24-carat gold coin, as a point of contact with the Almighty. A seeking and yearning soul is all that is required to make contact with the Supreme Being. Only a con artist would make the patently ridiculous claim that a gold coin, engraved with Trump’s face, conducts the divine energy the same way wire conducts electricity. Only a Trump cultist would swallow such hogwash. Wallnau is destined to make millions of the ignorance of Trump supporters.

Wallnau claims that if millions of believers use the coins as a “point of contact” that their faith will be released, and I guess that means that Jehovah will smite godless liberals, rain down fire on abortion clinics, and strike immigrants with boils until they return to their godforsaken countries. 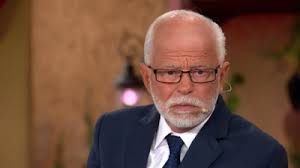 “Jim Bakker slipped out of most people`s collective consciousness after he fell from grace following a sex scandal and his 1989 fraud conviction. But the disgraced televangelist is back, focusing on the apocalypse and urging people to buy both real estate and eye-poppingly expensive extreme survival warfare water bottles from him to prepare.

Bakker, who served five years in prison for 24 counts of wire and mail fraud and conspiracy, is selling cabins in Missouri`s Ozark mountains, telling followers the area (which he calls Morningside) will be `the safest place to live` when the Apocalypse hits. Prices for the cabins weren`t disclosed, but you can rent one for as little as $85 per night right now.”

Most televangelists make a killing selling “pie in the sky,” “Accept Jesus, and give your tithes and offerings to our ministry and God will reward you with a mansion in paradise.” Millions of marks living in trailer parks and subsidized housing respond, and the televangelists live in mansions and fly in Lear Jets thanks to their deluded followers.

Other more savvy religious con artists make an even bigger killing selling nonexistent real estate to their followers. In the 1980`s Jim Bakker sold tens of thousands of “lifetime memberships” entitling buyers to an annual three-night stay at a luxury hotel at Heritage USA. Only one 500-room hotel was ever finished, these morons had a better chance of spending their vacation in their heavenly mansion, than they did at Bakker`s hotel.

In 1988 Bakker was convicted on eight counts of mail fraud, 15 counts of wire fraud and one count of conspiracy. His religious empire came crumbling down, his wife divorced him, and he spent a year in a federal penitentiary.

Bakker resurfaced in 2003, with a new wife and a new show with a viewership only a fraction of what it was during his heyday in the 1980`s. His new shtick is selling freeze-dried food, bottled water and cabins in Missouri`s Ozark mountains where believers can weather the End Times. Bakker is hawking 28 ounce `warfare` water bottles, which he claims filter out contaminants, the idiots who watch his show can buy a half-dozen for $150.

Bakker`s community in the Ozarks in called “Morningside” and its brightly painted indoor town square is dominated by a 15-tall Jesus statue. I don`t have to visit Bakker`s compound to know that the only Jesus you will find there is the hokey giant-ass Jesus.

Who knows what kind of financial shenanigans the disgraced evangelist is committing considering he owes million to the IRS according to Wikipedia. I`m betting that it won`t be long before he`s back in the Big House.