When the camera sweeps over the audience at a MAGA rally I always see a sea of white faces, but at almost every Trump rally “Blacks for Trump” are strategically placed right behind Trump.

The Blacks for Trump are Uncle Toms, or stated in a more politically correct way, useful idiots. Voting for Donald Trump while Black is a crime against your own race, and being a member of Blacks for Trump and allowing yourself to be used by him is an unforgiveable sin.

Blacks for Trump in 2022 is as incongruous as Negroes for George Wallace in 1968 when the notorious segregationist ran for president.

In the photo at the top of this page members of the racist “Proud Boys’ are posing with members of “Blacks for Trump” while flashing white power symbols. This picture captures the stupidity of Blacks for Trump. 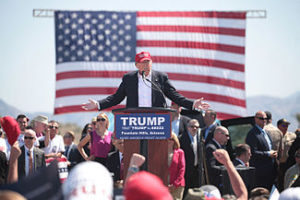 During Donald Trump`s unhinged rally in Phoenix on Tuesday night, two thoughts popped into my mind that kept my awake all night long.

Question 1: Why in the name of God is Trump still holding campaign rallies? Campaign rallies are by their very nature divisive and partisan events, a candidate attempts to solidify his base by attacking his opponent.

Somebody needs to remind Trump that he won the election and he`s no longer a presidential candidate, but the President of the United States. With every speech that he delivers, and every press conference that he holds, he should be seeking to unify the country.

Question 2: Who in the name of God was that black guy strategically placed behind the president, holding a sign proclaiming “BLACKS FOR TRUMP.” As a Latino I`d rather walk downtown buck naked wearing a cowboy hat and high heels, than stand behind Trump when he`s delivering a speech. Why would any self-respecting black man attend a Trump rally?

A black man would have to be stark raving mad in order to support our Nazi-sympathizing president. It shouldn`t come as any surprise that the black dude standing behind Trump is crazier than a shi*house rat. According to his website he believes that the “real KKK slave masters” are Cherokee Indians and that ISIS and Hillary Clinton are plotting a race war to kill all black and white women in America. Like I said, homeboy is nuttier than a fruitcake.

In the six months that Trump`s been in office he`s clearly demonstrated that he`s morally, intellectually and temperamentally unfit to be president. Anybody, not just religious and ethnic minorities, would have to be freaking nuts to support him.