“BE IT a bird, a plane, or Santa dropping off some last minute presents – something unexplained was seen circling the Sunshine Coast skies last night.

In Australia it`s never a good idea to scan the skies in search of UFOs, while your looking up a dingo may kidnap your baby, or a kangaroo might deliver a swift kick to your arse.

The newspaper article states that Renee Anderson was celebrating Christmas when she saw the UFO, and the filmed it and posted the video on Facebook. Perhaps if she had done a little less celebrating she wouldn`t have embarrassed herself and her family by posting the dubious video on social media.

If you videotape a UFO while you are drunk as a skunk, wait until you sober up before posting it online.

“A local wing of Austria`s Green Party announced it is holding a special meeting to teach women how to urinate standing up in unclean public bathrooms.

The Green Party in Perchtoldsdorf, Lower Austria, which periodically holds women`s breakfasts to discuss social and political issues, announced that the theme of the coming Saturday`s meeting will be `everything that concerns the pelvic base.`

The party said the discussion will include instructions on how to urinate from a standing position at music festivals, sporting events, and other locations where unclean restrooms are likely to be found.

The participants at the meeting will be instructed on how to build simple devices to assist with standing urination, organizers said.”

Teaching women how to urinate standing up is a biological absurdity, and an affront to the Almighty! What in the name of God is next? Will they hold a special meeting to teach women how to adjust their crotch in public just like the dudes?

I am insulted and outraged by the temerity of these women in appropriating male behavior.

When I urinate standing up, I bask in my male privilege and hum “It`s a Man`s World” by James Brown.

These radical womyn really piss me off! 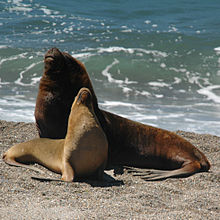 “An Australian couple woke up Christmas morning to find a fur seal doing its best impression of a hood ornament on their car, but residents of the town say this is not the first time a seal has tried to move in to the neighborhood.

Animal control officers in Newstead, a suburb of Tasmania, subdued the seal as it ran from driveway to driveway and car to car through the neighborhood, apparently unsure how to get back to the nearby waterway it came from.”

I wouldn`t be surprised if a dingo wreaked havoc Down Under on a Christmas morning, kidnapping a baby from a living nativity scene, or if kangaroo flash mob attacked shoppers at a mall.

Australians wage a never-ending battle to reclaim their land from the native wildlife, if you visit Australia make sure you are never without a knife worthy of Crocodile Dundee.

But it`s not often that a seal goes wilding in Australia, this seal terrorized Newstead before it was subdued by animal control officers.

Most dangerous job in the world: Animal control officer in Australia.