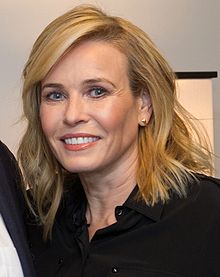 “The outspoken former talk show host, who has been very vocal about her political leanings in recent months, stripped down to next to nothing in an effort to promote voter participation in the upcoming midterm elections, which take place on Tuesday.

Handler took to Instagram rocking nothing more than a pair of black lace underwear, and covering her chest with her arm, while standing around in a sizeable dressing room.

“You have to vote, like your life depends on it. Vote!” a mostly nude Handler playfully intoned, before detailing her upcoming engagements stumping for Democratic California congressional candidates Katie Porter and Gil Cisneros.”

Kudos to Chelsea Handler for going to extreme measures in an effort to promote voter participation in the midterm elections. I share her desire to flip the House and the Senate as a check on Donald Trump. Over the last couple of years I`ve written hundreds of anti-Trump essays, but I`m not going to post a pic of myself in my tighty whities to urge people to vote. That would have the opposite effect of making voters turn away from politics altogether.

Although I appreciate Handler`s enthusiasm I question her judgement, a pic of a semi-nude 43-year-old woman isn`t going to convince anyone to vote. In fact only a boob would be persuaded to vote by a topless photo of a woman past her prime.

Screw anyone who thinks I`m guilty of body shaming, anyone who posts a semi-nude image of himself/herself on social media is inviting praise as well as criticism.

But Handler`s point is well taken, for God`s sake vote blue to emasculate the racist buffoon sitting in the Oval Office.