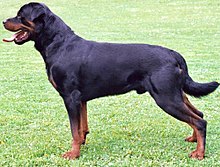 “A 74-year-old man who was shot by his dog while hunting in New Mexico says he forgives the 120-pound Rottweiler-mix named Charlie.

`He`s a good dog,` Tex Gilligan, recovering in Texas after the accidental shooting, told ABC News. “`He] did not mean to do it,` he said.

Gilligan was in the New Mexico desert hunting jackrabbits when Charlie, one of three dogs with him at the time, reportedly caught his paw on the trigger of the gun and fired a shot which hit Gilligan in the back through the driver`s seat.”

A septuagenarian has no business driving, let alone hunting, at that advanced age your vision is shot, your reflexes are as slow as molasses, and your mind is on permanent vacation.

Gilligan`s license should be suspended, his hunting rifles should be confiscated, and he should be confined in a rest home where the most dangerous weapon at his disposal would be a plastic butter knife.

Gilligan doesn`t deserve any credit for forgiving his pooch, he`s the one who left the gun positioned in the truck with the barrel facing up, towards the driver.

I respect the elderly and when I see my eighty-something neighbor raking the leaves on his front lawn I wave hello, but if I saw him loading a rifle into his vehicle I would pray that the Grim Reaper would pay him a visit.