“I remember this guy Velshi. He got hit in the knee with a canister of tear gas, and he went down. He was down. ‘My knee. My knee.’ Nobody cared. These guys didn’t care. They moved him aside.

And they just walked right through. It was the most beautiful thing. After we take all that crap for weeks and weeks, and you finally see men get up there and go right through them, wasn’t it really a beautiful sight? It’s called law and order.”

Donald Trump temperate and oh so presidential remarks at a Minnesota MAGA rally.

“So, @realDonaldTrump, you call my getting hit by authorities in Minneapolis on 5/30/20 (by a rubber bullet, btw, not a tear gas cannister) a ‘beautiful thing’ called ‘law and order’. What law did I break while covering an entirely peaceful (yes, entirely peaceful) march?”

Velshi was not agitating or protesting, as a correspondent for MSNBC he was in Minneapolis covering a peaceful protest in the aftermath of George Floyd’s lynching by the Minneapolis police.

The only violence was perpetrated by the police who fired tear gas and rubber bullets at the peaceful demonstrators. Velshi was hit on the knee by a rubber bullet, and the cameras captured him writhing in agony.

Trump’s despicable remarks were met with applause and laughter by his MAGA crowd of predominantly white evangelical Christians. Is anyone surprised that white evangelicals are so bloodthirsty and vengeful?

When cops fire tear gas cannisters and rubber bullets at peaceful demonstrators that’s not an example of maintaining law and order, it’s an example of police arrogance and contempt for the people they have sworn to protect and serve, that led to the murder of George Floyd.

Trump and his followers are a threat to freedom of speech, law and order and democracy itself. It’s time to kick Trump to the curb.

If Bozo the Clown pontificated on the coronavirus pandemic his nonsense wouldn’t be dismissed out-of-hand if he was standing behind a lectern bearing the presidential seal.

By any measure, by any standard, Donald Trump is a blithering idiot who knows next to nothing about science or medicine, nevertheless when he speaks during his daily coronavirus briefing, he commands our attention by virtue of his office.

Since he is unable to hold any MAGA rallies in the age of the coronavirus, Trump is using his daily press conference to energize his base. He touts misinformation about drugs not approved by the FDA, offers inaccurate and overly optimistic assessments of the progress of testing and vaccine research, and generally does what he excels at, lying like a dog.

I tune out the stable genius whenever he speaks on any subject, but unfortunately his rosy outlook on the coronavirus pandemic encourages people, mainly his base, to be less careful with their personal hygiene and social distancing.

It’s time for CNN and MSNBC to stop airing his daily news conference, it does more harm than good to provide a master of propaganda with free air time. Fox News, the Trump’s administration propaganda arm, should be the only news outlet airing his deceitful rhetoric.

“President Donald Trump went after Chuck Todd and NBC News on Saturday morning, asking when they will stop reporting on `the fake Trump/Russia story.`

`When will Sleepy Eyes Chuck Todd and @NBCNews start talking about the Obama SURVEILLANCE SCANDAL and stop with the Fake Trump/Russia story,` the president tweeted.

When you have a mouth that resembles a sphincter, hair that looks like cotton candy that`s been dipped in urine, a facial complexion that an Ooompa Loompa would envy, Lilliputian hands, and the physique of a fat pig, it behooves you not to ridicule anyone`s physical appearance.

But Trump, like most bullies, doesn`t possess the intellect to criticize the ideas of his critics, so he attacks their physical appearance.

If Trump mocked a reporter`s disability, you know he wouldn`t be able to resist making fun of Chuck Todd`s sleepy eyes.

If Todd`s eyes appeared sleepy because he was high on crack, and drunk on cheap booze he would still be able to get the best of Trump in a battle of wits. 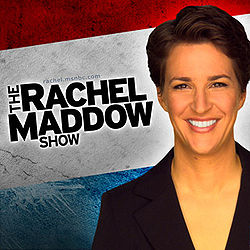 For a few moments MSNBC`s Rachel Maddow was in a position that she`s unfamiliar with: At the center of the political world.

With a single tweet, Maddow became the Coc*tease Queen of Cyberspace:

Trump haters and political junkies were salivating at the prospect that Maddow was going to bring down the Trump administration by exposing his shady business dealings live on her program.

Maddow`s butch lesbian vibe and didactic presentation aren`t my cup of tea — not that there`s anything wrong with butch lesbians or ponderous speakers. But even I was waiting with bated breath for the big reveal.

MSNBC even stole a page from the CNN playbook, running a countdown clock on its screen counting down the minutes to a “Trump Taxes Exclusive.”

All eyes were on Maddow even though it was actually another reporter`s exclusive, the two pages from Trump`s 2005 federal tax return were mailed to David Cay Johnston, author of the book, “The Making of Donald Trump.”

Maddow`s publicity stunt was such an epic fail that commentators were wondering if Trump had leaked his own tax returns. The only thing we learned is that Trump made a lot of money and paid a lot in taxes,Trump couldn`t ask for better publicity or a bigger diversion from his TrumpCare disaster.

That tells you everything you need to know about the most epic fail in cable news history.