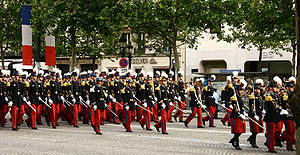 “Donald Trump loves pomp and circumstance. He loves public displays of toughness. And he really, really loves the military.

Add it all up and you get this: `Trump tells Pentagon to plan a military parade.`

The parade would be modeled after the Bastille Day parade that Trump spectated last year during a visit to France. `The marching orders were: I want a parade like the one in France,` one military official told The Washington Post, which broke the story.”

Evidently Trump has become green with envy as he`s seen Lil` Kim preside over a military parade once or twice every year. Ostensibly Trump wants a parade to demonstrate his love and appreciation for the military, but we all know that he wants missiles parading down Pennsylvania Ave. as compensation for his tiny hands.

America is the greatest military power in the world and we don`t need to stage elaborate military parades. The world is cognizant of our military might, for good or ill, our military is engaged in dozens of countries.

What we really need to do is impress the world with the power of our democracy to do good, by accepting refugees from every corner of the world.

Unfortunately, Trump will probably get his silly and expensive parade because nobody in his administration has the guts to tell him that it`s a stupid idea.