I just went to a MACDONALD’S and there was no MCFISH on the menu.  When the hell did that happen?  Is it permanently banned? Or is just my “local” MACDONALD’S.  I demanded to see the “manager” but they accused me of being a “MALE KAREN” so i walked out.

What is it with QAnon crackpots and their penchant for misspelling and capitalizing common words? It’s McDonald’s and not MACDONALD’S; Kelly could have spared himself the embarrassment of misspelling the name of the All-American fast-food behemoth if he had simply taken a look at the image of the McDonald’s restaurant that he posted with his tweet.

What a MCIDIOT, of course there’s no MCFISH on the menu, just like there’s no MCBURGER and no MCHOTDOG. Anyone who regularly patronizes McDonald’s knows that their fish sandwich is the Filet-O-Fish and it’s still available for those with idiosyncratic tastes.

It must have been at least a MCDECADE ago when Kelly last went to a McDonald’s, or he would have known the correct spelling of the restaurant and the correct name of their fish sandwich. Methinks Kelly is just an elitist egghead pretending to be a man of the people.

I think this fake conspiracy theorist is just posting a fake anecdote on Twitter, he doesn’t strike me as someone with the nerve to demand to see the manager. Kelly, you aren’t a MALE KAREN, you’re more like a MALE PUSSY. 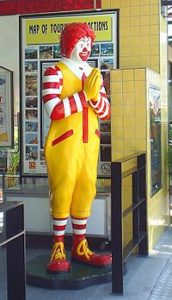 “Crime Stoppers in New Jersey is offering a reward for the return of a life-size Ronald McDonald statue stolen form a local restaurant.

The Hunterdon County Prosecutor said the iconic 250-pound fiberglass statue was stolen from a McDonald`s restaurant between 11 p.m. April 26 and 10 a.m. April 27.

New Jersey Crime Stoppers is accepting anonymous tips and offering a reward of $500 to have the statue returned to its owners, Philip and Diane Koury, who have co-owned the franchise since 1991.”

It doesn`t get any more evil than a life-size statue of a clown sitting on a bench outside of a McDonald`s restaurant, the civic-minded citizen who stole the abomination should be awarded a key to the city.

A clown is a universal symbol of evil, and to plant a statue of clown outside of a McDonald`s as a means of enticing young children to enter the Golden Arches that leads to obesity, tooth decay and myriad other diseases is the real crime.

Snitches get stitches and anybody who narcs on the gentleman who stole the accursed Ronald McDonald statue should end up looking as if he was sewn together by Dr. Frankenstein. 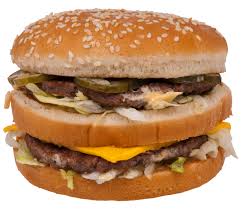 The tweet, which came from the fast-food giant`s official corporate account, also said the company would love to have Barack Obama back as president, and that Trump has `tiny hands,` the Associated Press reports.

You`d think a billionaire would dine only on filet mignon, caviar and lobster, but actually Donald Trump loves fast food, and he once starred in a McDonald`s commercial.

I don`t know how Trump can get his tiny hands around a Big Mac, he probably has an assistant cut the giant burger into smaller portions that he can pick up.

Contrary to the Time magazine article, McDonald`s didn`t quickly delete the message calling Trump a “disgusting excuse of a president.” The offensive Tweet was online for over an hour before it was finally deleted. If McDonald`s Twitter account was really compromised, and the hacker posted a tweet claiming that the Big Whopper was superior to the Big Mac, I guarantee that message would be deleted in a New York minute.

Maybe Trump will get revenge by attacking McDonald`s on Twitter and by doing a commercial for White Castle, he shouldn`t have any problems holding a White Castle slider with his diminutive hands.