Melania Trump has been keeping a low profile lately, and so I searched her on Google News to find out what she`s been up to lately.

The first lady is a former model, and I guess it`s not surprising that most of the articles referenced her outfits.

Then again, she has the gravitas of a boa feather, and the public doesn`t want to read her views on politics or current events.

One UK tabloid even speculated that Melania was signaling her support for Brexit by wearing outfits made by UK designers.

The fashionista recently wore a $2500 Gabriela Hearst dress that looks like it created from the fabric of a whore house sofa, was she expressing her support for the legalization of prostitution? The colorful dress also looks like a shower curtain, maybe she was just encouraging Americans to take daily showers.

My essays are usually short and concise, since this essay is about the bimbo first lady it`s shorter than normal.

Link to pics of the infamous Garbriela Hearst dress:

After months of being roundly criticized for not visiting American troops in a war zone, Donald Trump, with Melania in tow, made a surprise visit to Iraq December 26.

Trump treated his trip like a campaign stop, complete with a campaign stump speech full of lies and tomfoolery.

As usual Melania didn`t say or do anything of consequence, and as usual reporters had nothing to comment us besides her usual strange outfits.

Homegirl made quite an entrance when she descended from Air Force One wearing a green coat and skin-tight nude colored leather pants.

Thank God her hideous green coat covered her crotch area, the world was spared the sight of the Mother of All Camel Toes.

Forgive me, I apologize for being so disrespectful. I apologize to camels everywhere for comparing the first lady to them.

Melania Trump`s first solo international trip was to Africa, perhaps she was seeking to make amends for her husband`s reference to the shithole countries of that great continent.

Or maybe she just wanted to get away as far as possible from her national embarrassment of a husband, her second international trip might be to Antarctica.

The First Lady is all fluff and no substance, naturally it was her wardrobe selection that caused controversy in Africa and in America.

Fashionistas in America mocked Melania for her beige suit, black tie and pith helmet that resembled the outfit that pop icon Michael Jackson wore in his “Smooth Criminal” video.

Citizens in Africa were outraged over Melania wearing a pith helmet on a safari in Nairobi National park in Kenya. While at the park she feed elephants and pretended to inspect them.

The controversial hat has a link to the colonial era and is a symbol of oppression. Would the clueless First Lady don a Stormtroopers brownshirt uniform while visiting Germany?

With his urine-colored hair, sphincter-shaped mouth and orange complexion Donald Trump looks like a freaking clown, and Melania Trump looks like Michael Jackson on crack, God the Trumps are such an embarrassment. 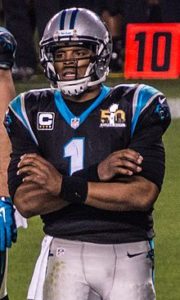 Cam Newton turns heads because of his athleticism and brilliant play on the gridiron, the reigning NFL MVP is a top notch quarterback.

Off the football field people shake their heads at his flamboyant fashion sensibilities, he looks like a drag queen on crack.

Newton should come out of the closet, and not just because he spends too much time in his walk-in closets contemplating which outrageous outfit to wear. Newton should come out of the closet as a gay man, you don’t need to possess a finely-tuned gaydar to deduce that his effeminate clothes and effete demeanor reveal him to be a stereotypically gay man.Of course not every gay man sashays around in frilly attire, but there is a subset of the gay culture that rolls that way.

I don’t mean to imply that there is no room in the NFL for gay quarterbacks, in fact I wish Cam would come out as gay because it would advance gay rights. Cam may act effeminate off the football field, but on the gridiron he is fearless, putting his body and career on the line rushing for first downs.

Quarterback/fashionista Newton should have been arrested by the fashion police a long time ago, kudos to his couch for benching him for the first series of the game against Seattle for failing to wear a tie on the team’s flight from northern California to Seattle.

Journeyman quarterback Derek Anderson started the game instead of Newton, and promptly threw an interception on the first play of the game. A Seattle linebacker returned the pick to the 8-yard line, and the Seahawks went up 3-0, en route to a 40-7 rout.

Most football fans could care less about Cam’s penchant for dressing like a trans gay hooker, but when his disregard for conventional dress directly leads to a losing a football game — Houston we have a problem.