However, Burger King Austria is taking the concept a bit too far with its Pride Whopper, which is the same Whopper served with the same half of a bun on each side. According to Burger King Austria, the special Whopper represents equal love and equal rights.

Sex is wonderful and beautiful, but it’s wrong to define a person by his sexual preferences. 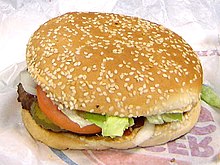 “On April 12, Burger King`s U.K. branch released a video to YouTube of a guide dog being successfully trained to smell out flame-grilled Whoppers for his visually impaired owner.

British hockey player Nathan Tree describes his golden retriever Flynn as his “best friend” who “saves my life every day.” Traveling often for his career on the ice, Tree was inspired to teach his pup to sniff out Burger King Whoppers, his “go-to food.”

After fifteen days of training, Flynn is successfully able to identify a flame-grilled Whopper in a blind scent test with another burger and fish and chips, just in time for Tree`s trip to Paris.”

According to a video posted on YouTube by Burger King a guide dog has been successfully trained to smell out flame-grilled Whoppers for his blind owner.

Methinks this is one of the greatest whoppers ever told in an advertising campaign. I`m not blind, but I am lazy as hell, and it would be terrific if I could train my pooch to sniff out the closest Burger King, and bring me back a couple of Whoppers.

But I`m afraid my doggie would only bring back the wrappers, she`s pilfered a burger from my kitchen table on more than one occasion.

In the commercial Tree and Flynn walk through the City of Lights, and the canine successfully leads his owner to a Burger King.

Those type of miracles may only happen in commercials, but Flynn is an adorable pooch and those Whoppers look mighty tasty. 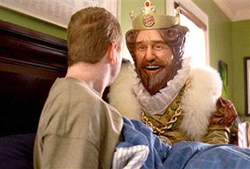 “Belgium`s royal family says it has contacted the fast food chain Burger King over an ad that invites people to choose between the country`s King Philippe and the company`s mascot.

The ad, on whoistheking.be, asks those who choose Philippe: Are you sure? He won`t be the one to cook your fries.

A spokesman said the use of the king`s image must be approved by the royal family, but they had not been asked.

On the website, Philippe is represented by a cartoon.”

I love Burger King, I would be perfectly content to subsist on a diet of Whoppers and burgers for the rest of my life, however short that life may be.

But I loathe with an undying loathing the perpetually smiling, plastic-faced Burger King mascot, he is the creepiest fast food mascot of all time.

Any father would let his only daughter marry Ronald McDonald, rather than allow her go out on one date with the perversely creepy Burger King.

The Burger King corporation banished the loathsome king in 2011, but for some unfathomable reason he made a comeback in 2015.

I don`t live in Belgium but I went to the whoishteking.be Web site to vote for King Philippe over Burger King. I would vote for any world leader, including Kim Jong-un over the Burger King, with the exception of Donald Trump.

There`s nothing better in the world than biting into a juicy Big Whopper, but if a Burger King commercial featuring the Burger King comes on while I`m eating the burger, it would make me vomit.