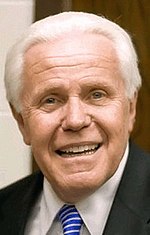 “Jesse Duplantis, the Destrehan-based prosperity gospel televangelist with a global reach, is asking disciples for money to buy a jet that costs $54 million so we can go anywhere in the world in one stop. He seeks the donations in a video posted last week on his ministry`s website.

`I really believe that if the Lord Jesus Christ was physically on the Earth today, he wouldn`t be riding a donkey,` Duplantis says in the video. `He`d be in an airplane flying all over the world.`”

In 2015 Duplantis appeared on fellow scammer Kenneth Copeland`s television program, and they defended their use of private jets. They argued that commercial planes were full of a “bunch of demons” that bog down their busy schedules with prayer requests.

The “bunch on demons” are the sheep-like followers of these false prophets, who think they have a direct line to God because they are so financially successful.

I have no doubt that Duplantis will raise the $54 million, after all these are the same fuc*ing morons who voted for Donald Trump.