Stand-up comedy is a macho game, the comic prowls the stage like a lion stalking his territory. He glares at the audience, seeking to win them over with his verbal and mental artistry.

A boxer wouldn’t tolerate a member of the audience jumping into the boxing ring during a match, and no stand-up comic worth his salt would tolerate a critic or heckler jumping up on the stage and attacking him. Both the boxer and the comic should beat the living daylights out of any interloper.

An idiot armed with a replica gun and a knife attempted to tackle comedian Dave Chappelle on stage during a performance for the Netflix Is a Joke Festival at the Hollywood Bowl. Chappelle is no Chris Rock, he and his security team and his celebrity friends, including Jamie Foxx and Busta Rhymes, proceeded to beat the hell out of the fool.

Chappelle is a man’s man, and a comic’s comic, and nobody will succeed in cancelling him, not Hollywood, and certainly not a moron who rushes the stage. 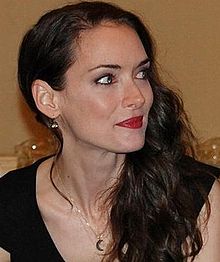 “Winona Ryder ended up becoming the most memorable attendant of the Screen Actors Guild Awards on Sunday after her hilarious series of expressive reactions to actor David Harbour`s speech swept the internet.

The actress, who stars alongside David in hit Netflix series `Stranger Things,` could not control her wide-reaching range of emotions when her co-star chose to deliver a rousing speech as the cast were given the award for Best Ensemble Drama.

Winona, 45, seemed somewhat unprepared for the actor`s powerful and moving speech and led viewers on the journey of her reactions with increasingly dramatic facial expressions.”

There is but one item on my bucket list: Winona Ryder

Before I give up the ghost I want to spend one day and one night with Winona. That one transcendent day will more than compensate for a lifetime of disappointments and failures.

We would spend the entire day on a shoplifting spree, Winona would do all the shoplifting, and I would serve only as a distraction for the loss prevention officers.

That larcenous day would put a glow in my idol`s face, and it would render her in the perfect state of body and mind to knock boots with me all night long.

The kaleidoscope of facial expressions that Winona would make while we are engaged in an epic session of lovemaking would surely stop my heart, and at that point I wouldn`t care if I woke up in heaven or hell.

Until that glorious day when my wish is fulfilled, I have the video collage of Winona`s sexy and adorable facial expressions.