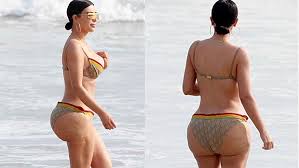 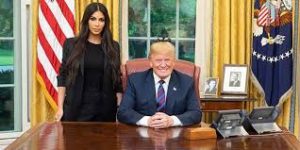 If there is one image that encapsulates the absurdity of the Trump administration it`s the photograph of Donald Trump seated behind the Resolute desk in the Oval Office, his dentures exposed in a rictus befitting a clown, a serial killer, or the crazy uncle who lives in the attic.

In my nightmares I run naked in the woods with Trump`s orange disembodied head attempting to chomp my pecker off, out of spite, jealousy or sheer mischief.

Reality queen Kim Kardashian is standing slightly behind him, wearing a more somber expression. Even the queen of reality TV seems to be cognizant of the absurdity of the situation. She is dressed in black, in a modest and conservative outfit that wouldn`t be out of place in Tehran or Riyadh.

Reality can`t get any more unreal than Kim Kardashian meeting with Donald Trump at the White House. Am I living in a computer simulation? Am I dead and in hell? Am I insane? This can`t be an LSD flashback, because I never dropped acid. But at this point I`m open to any explanation.

A few days ago, Trump said he would probably support a new bipartisan bill that would return decision-making on marijuana laws to individual states. That`s the least he can do, the only way we can cope with the unreality of the Trump age is by being high as a kite.

Pic of Trump and Kardashian: