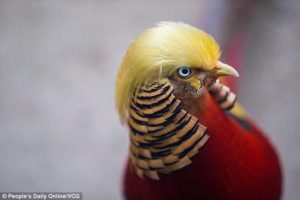 “Donald Trump, 71, might be the most narcissistic person on Earth, so it was wildly entertaining when a gust of wind blew apart his facade of seeming to have a full head of hair. The president was boarding Air Force One to head to Mar-A-Lago on Feb 2 when wind took his hair upwards and exposed what appeared to be a giant bald patch on the back of his head. The video went viral this week and everyone from late night talk show hosts to news anchors have been laughing it up. Of course Trump is having a fit that the world is mocking his epic hair malfunction and is doing everything to ensure that it never happens again.”

This is an update to my article:

Donald Trump is a thin-skinned narcissist, and whenever he`s mocked on SNL or by a late night comic he goes berserk.

Trump has endured countless jokes about his tiny hands (and by extension his tiny pecker), his mouth that resembles a sphincter, his orange complexion, his fat ass that can seat a UN delegation discussing world peace, and of course his ridiculous coiffure.

The orange buffoon has vehemently denied that he wears a toupee, but this viral video is proof positive that underneath the combover from hell or wig is a scalp that is as shiny and smooth as a bowling ball.

The only thing that would have been more embarrassing than being exposed as a bald freak, would be if Mike Pence had posted a pic of the decrepit fool changing his diapers on his Twitter feed.

The vain moron was livid when the video exposed him as a bald-faced liar and a bald orangutan.

There`s no satisfaction in blaming the wind, I`m sure Trump berated his staff for the humiliation he suffered when the wind blew apart the fake news that he has a full head of hair.

I wonder did Trump make Mike Pence manicure his tiny hands, order John Kelly to apply Vaseline to his sphincter-like mouth, command Ben Carson to measure his tiny penis and declare that he missed his calling and should be making adult movies, or force Hope Hicks to slather fake tan on his ugly mug.

Not that I feel sorry for his staff, they deserve to rot in hell for enabling the racist, short-fingered vulgarian.