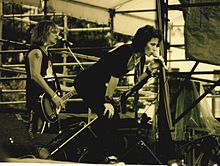 A cover of quintessential bad girl rocker Joan Jett performing Love Is All Around, the theme song to The Mary Tyler Moore Show, has resurfaced on social media.

Mary Tyler Moore was the girl-next-door who could turn on the world with her smile, and Joan Jett was the girl from the wrong side of the tracks who turned the rock world upside down with her snarl.

You wouldn`t think these women from different worlds would have anything in common, but they both embody “girl power.”

On the Mary Tyler Moore Show Moore played Mary Richards a producer in a male dominated world of a TV newsroom. Richards, a single career woman, wasn`t preoccupied with finding a husband, the focal point of the show was her occupation and her interaction with her colleagues.

Mary Tyler Moore was a successful businesswoman, writer and actress, and a role model for women. Her portrayal of Mary Richards inspired many women to become journalists, anchors and producers.

At the same time that Moore was smashing gender roles on the Mary Tyler Moore Show Joan Jett was smashing the conventional wisdom that rock was a man`s world, as a member of the all-girl rock group The Runaways. Jett went on to even greater success in the 80`s as the lead singer of Joan Jett and the Blackhearts.

Enjoy this video of Jett paying homage to Mary Tyler Moore by singing “Love is All Around” punk style.