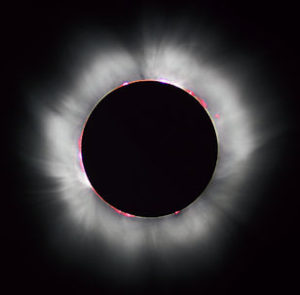 “As President Trump and first lady Melania Trump got in on Monday`s eclipse mania, the president took a peek at the sun without the proper eyewear.

Accompanied by son Barron Trump, the pair arrived on the balcony at 2:38 p.m, per pool reports. When asked how the view was, the president gave a thumb`s up.

At one point, the president appeared to glance up at one point sans eclipse glasses, leading to an aide shouting, `Don`t look,` per pool reports. Looking at the eclipse without the proper eyewear can lead to eye damage.

At 2:41 p.m., a minute before peak eclipse at the White House at about 81%, the president put on a pair of glasses and stood next to the first lady.”

I`m a normal human being, and I`ve never physically hurt anyone in my life, but like most Americans I have fantasies of torturing Donald Trump until he agrees to resign.

When I saw the photographs of the degenerate billionaire staring at the eclipse without proper eyewear, I grumbled to myself: Dear God, why didn`t you blind the bastard?

The Almighty isn`t going to smite the buffoon with a lightning bolt, or blind him, or kill him in a painful way that will bring joy to billions.

It`s up to citizens to get rid of the abomination by any legal means. It`s incumbent upon us to call our senators and congressmen, and demand that they impeach Trump or remove him from power via the 25th amendment.

Pic of the moron staring at the eclipse without protective eyewear: