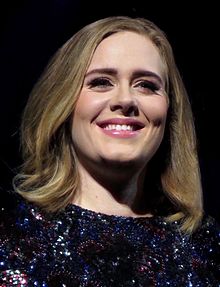 “Accepting the award for Album of the Year for her record 25, Adele instead said Beyonce deserved it.

She said: `I can`t possibly accept this award. I`m very humble and I`m grateful and gracious but my artist of my life is Beyonce and the Lemonade album was just so monumental – Beyonce, it was so monumental – and so well thought out and so beautiful and soul-baring.

`The way you make my black friends feel is empowering. You make them stand up for themselves and I love you and I always have.`”

Adele deserves all the accolades, she has almost single-handedly saved the music industry, “25” was the top selling album of 2015 and 2016.

But her acceptance speech for “album of the year” struck a discordant note. The album “25” was a masterpiece, and not only Adele, but all the producers, engineers, writers and back up singers who worked on the album deserved the recognition. Adele was out of place not only to reject the Grammy, but to break the trophy in half.

Adele`s white guilt is clouding her judgement, she should apologize to her collaborators on “25,” her fans, and the Grammys. On one side of the racist spectrum are the blatant racists who denounce Beyonce as a talentless ghetto skank, and at the other end are the obsequious white folks who bend over backwards praising Beyonce as the Queen of the Universe.

Unlike Adele I don`t separate my friends by race, if I separate them at all it`s by loyalty. There are my loyal friends who stick with me through thick and thin, and then there are my fair-weather friends who desert me when times get tough.

For Adele to speak on behalf of her black friends is patronizing and insulting — maybe she should only open her mouth to sing.