Donald Trump has the patience and attention span of a colicky baby, it’s no surprise that he’s often called a “man baby” and often depicted as a baby by political cartoonists.

An inflatable caricature of Trump known as Trump Baby has flown in countless demonstrations all over the world. My most horrifying nightmare is that when I’m raptured to meet Christ is the air, I’m intercepted by Trump Baby and dragged down to hell.

Even Donald Trump Jr. depicted his infantile father as a baby, he shared a doctored image on Instagram depicting his dad as Baby Yoda from the new Disney Plus “Star Wars” spinoff series “The Mandalorian.”

Arguably Baby Yoda is the most beloved character from the Star Wars franchise and there’s a special place reserved in hell for Trump Jr. for desecrating the image of Baby Yoda.

Trump as Baby Yoda is almost as disturbing and mind-numbing as Trump as President of the United States.

For the love of God let’s put this man baby on permanent time-out on election day 2020. 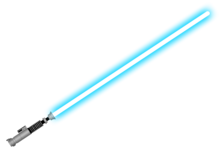 “A 42-year-old Pennsylvania man is facing an assault and harassment charges after allegedly beating his mother with a Star Wars light saber, according to court records.

Joan Vargas, 75, told police that her son Andrew had hit her repeatedly with what she called a light saber. Vargas said she was sitting on a dining room chair when her son began striking her with this saber in the head, on her back/neck area and on her wrist.

Andrew Vargas, who lives with his mother, was arrested on misdemeanor assault and harassment charges. He is being held in the Clearfield County jail in lieu of $10,000 bail. Vargas`s rap sheet includes prior convictions for theft, drunk driving, and criminal trespass.”

The 6` 4,” 330-pound Vargas claims that his mother was conking herself over the head with the light saber, and he told the cops that she has many issues.

A 42-year-old man who still lives with his mother and has a collection of light sabers is the one with many issues.

Perhaps if Ms. Vargas had disciplined her son with a switch he wouldn`t have turned into such a cowardly loser.

He is being held in jail in lieu of $10,000 bail, I guess the sap can`t afford a thousand bucks to stay out of jail.

Vargas may be a bear of a man, but even if he was allowed to take his light saber collection with him to jail, he won`t be able to fend off jailbirds from beating him up or worse. Prisoners hate pedophiles and cowards who beat women, he`s going to have a tough time behind bars.

My thoughts and prayers are with Ms. Vargas, it`s a shame that at a time in her life when she should be enjoying her golden years, she`s being harassed by her yellow-bellied snake of a son.