Donald Trump is turning 73 on June 14, and he’s managed to restrain himself from issuing an executive order making his birthday a national holiday. However, he is making a big deal out of his birthday, an email was sent this week to subscribers of the Trump-Pence campaign urging them to sign a birthday card that his lackeys will bestow on him come June 14. Their goal: Two million signatures.

Vice President Mike Pence will turn 60 on June 7, and I know what y’all are thinking: with his constipated smile and his white hair he looks older than Trump. Some kindhearted drag queens are making sure that Pence’s important day isn’t overlooked by releasing a video wishing him a happy birthday by urging people to donate money to LGBTQ organization in the homophobe’s name.

Many raging homophobes are latent gay men, and it wouldn’t surprise me if Pence bats for the same team as these lovely drag queens.

I bet Pence will play this video every day until he joins the big Broadway chorus line in heaven.

“If Mike Pence is so inclined, he has a seat reserved for him to watch Broadway`s The Prom, the new Broadway musical that made history in November by giving the Macy`s Thanksgiving Day Parade its first televised same-sex kiss ever.

The vice president, who has taken multiple anti-LGBT positions over the years, has been personally invited to watch the show that follows a lesbian girl`s efforts to take her girlfriend to prom in Indiana. In fact, the location was specifically chosen because it is Pence`s home state, according to The Prom`s co-writer and lyricist Chad Beguelin.

Mike Pence`s meticulously cut hairstyle is favored by a maître d`hôtel at a restaurant that caters to an exclusively gay clientele and a receptionist at a gay bathhouse, naturally there are rumors that the virulently anti-gay politician is a latent homosexual.

Pence famously calls his wife “Mother,” a clear indication that he doesn`t think of her in sexual terms. If Pence succeeds Trump as president I wouldn`t be surprised if everyone in his cabinet looked like a pool boy at a gay resort.

In November 2016, Pence was booed by a Broadway audience when he went to see Hamilton with his family, he might have reservations about attending another Broadway show.

I doubt Pence will attend considering “The Prom” features lesbians kissing, if the show featured gay hunks locking lips he would find an excuse to attend. He could always leave when the male leads lock lips, and explain to his evangelical base that he watched the hit Broadway show only to make a statement against gay sexuality.

Pence should do the right thing and come out of the closet and become a champion for gay rights. It would be a shame if he spent the rest of his life in his prayer closet getting real intimate with his male prayer partners. 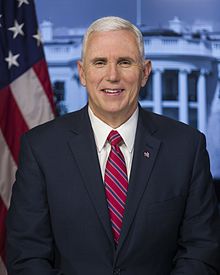 Vice President Mike Pence doesn`t strike me as a regular guy you could bond with over a couple of beers. In fact, he bears little resemblance to a human being, he has the air of a clone or a robot about him.

If you`re christening your baby, and you want to impress upon your friends that you`re not a total heathen, Mike Pence is the type of guy that you would invite, his sanctimonious look is tailor-made for such religious rituals.

Pence resembles a clone, a robot or a doll. Physically he is a dead ringer for that gay icon, the Ken Doll. The top Urban Dictionary definition for Ken Doll is: A male, overly attractive or primped, superficial, possibly straight, gay, bi or metrosexual.

Mike Pence, with his precision-cut hairstyle, looks like a receptionist at a gay bathhouse. Pence probably prays to Jesus every night that He would make him as penis-less as Ken so he wouldn`t be attracted to men.

Pence also resembles a bobblehead doll, when he stands behind the Stable Genius, rotely nodding at the nonsense emanating from his sphincter-shaped mouth.

If Trump, who resembles a Chucky Doll or a Cabbage Patch Kid is impeached, we will be stuck with the Ken Doll from the pit of hell.