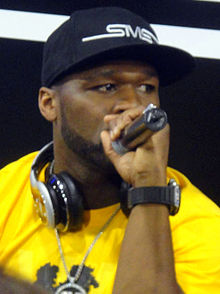 To keep things gangsta real, once a rapper reaches the age of 40, some homeboy should cap his ass if he doesn`t retire.

Fiddy desperately tries to keep relevant in the rap game by starting feuds with other rappers, but the 42-year-old rapper only succeeds in making a clown out of himself.

A video of the dinosaur rapper performing on stage at the Cannes Film Festival with senior citizen John Travolta dancing by his side has gone viral.

People just can`t get enough of the two-bit rapper and the most famous closeted gay in Hollywood making complete fools of themselves.

In his “Saturday Night Fever” days Travolta could really cut the rug, and in his “In Da Club” days 50 Cent could rap like a mofo, but today these decrepit entertainers shouldn`t be allowed on stage.