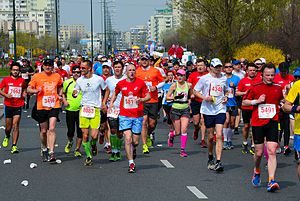 “When Ragen Chastain sets a goal, she wants it to be nearly unattainable. Which is how she went from hating running to signing up for a marathon.

`I decided I wanted to try a challenge and jump out of my comfort zone, and distance running had always been the thing that I was worse at in the entire world,` Chastain, 41, a speaker and writer, tells PEOPLE. `So I signed up for a marathon first thing.`

`I was looking around for other plus-size people who had done marathons, and I saw a lot of people who started the marathon but didn`t finish it,` she says. `So I was just really inspired by the idea of being plus-size and finishing the marathon, and the visibility that would create for other people who wanted to try it and thought they couldn`t because of their size.`

After completing a 20-week training program, Chastain successfully (if not painfully) finished the Seattle Marathon.

I applaud Chastain for not accepting the politically-correct orthodoxy that there`s nothing wrong with weighing as much as a baby hippo, and taking steps to lose some weight.

How about finishing a 50-yard dash in under five minutes before tackling a marathon?

Instead of “signing up for a marathon first thing,” she should have run to Jenny Craig or to a gym to sign up for a one-year membership.

I doesn’t matter that she completed a 20-week training program before running in the marathon, a 288-pound woman who runs in a marathon is risking a heat stroke, heart attack or stroke.

Chastain is self-centered beyond belief, sure she could have set a world record for a heifer completing a marathon, but did she consider what a eyesore she was to the spectators? Or that if she passed out first responders would have to lift her fat carcass onto a stretcher?

I hope the spectators didn`t enable her vanity by cheering her when she limped over the finish line.

Chastain would be well-advised not to run any more marathons until she drops down to 160 pounds.