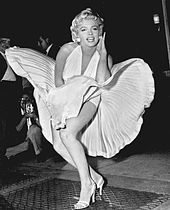 “A 26-foot tall statue Marilyn Monroe statue recently installed in a Stamford, Conn. park is scandalizing locals – because the movie starlet`s derriere is pointed straight at a neighboring house of worship.

Artist Seward Johnson`s `Forever Marilyn` captures the moment from `The Seven Year Itch` where the actress holds down her white dress as air blows up from a subway grate.

In the film, only co-star Tom Ewell sees what`s under Monroe`s skirt, but in Johnson`s colossal interpretation her underwear-clad caboose is on full display to all viewers – especially to those visiting the nearby First Congregational Church.”

Some members of the First Congregational Church have their panties in a twist over the controversial statue, but they really need to exercise their God-given sense of humor.

Some members go as far as to suggest that the Marilyn Monroe statue was deliberately and strategically installed so that her rear end would point at their precious house of worship. Nonsense, it wasn`t the devil behind a scheme to moon a church, it was God Almighty encouraging the congregants to put down their Bibles for a moment and appreciate a divinely inspired work of art.

Marilyn Monroe`s iconic pose is as quintessentially American as a church steeple, and everybody in Stamford, believers and nonbelievers, should be grateful that this masterpiece graces their city.