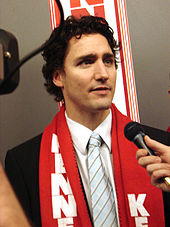 “Canadian Prime Minister Justin Trudeau is facing a backlash for correcting a woman who used the term mankind.

During a town hall event last week, Mr. Trudeau interrupted the young woman and urged her to say `peoplekind` instead.

The clip of the interaction has been making the rounds online with critics accusing Mr. Trudeau of `mansplaining` and making up words.”

The woman`s question/pontification had rambled on for about four minutes when Trudeau interrupted her.

It would have been perfectly reasonable for the Canadian Prime Minister to interrupt her with the admonition: Bitch please, just ask your damn question and sit down!

But Trudeau who is the quintessential politically-correct wanker instead berated her for using the term “mankind” instead of “peoplekind.” Peoplekind? Really? I have never in my life heard anyone other than Trudeau use that ridiculous term.

It`s perfectly acceptable to use “mankind,” although I usually use “humankind” or “humanity.” But to be triggered if someone doesn`t use a gender neutral term to describe the revolting species that is a cancer on Earth is the epitome of the pussification of mankind.

Trudeau is an embarrassment to Canada, feminists and all of mankind.