Evangelicals believe in the Rapture of believers, where born-again Christians around the world will taken up to the clouds to meet Jesus prior to the unleashing of apocalyptic events that will make the biblical flood look like a relaxing session in a Jacuzzi.

Even secular Americans are familiar with images that depict the Rapture like empty pile of clothes in cars and planes whose drivers and passengers have suddenly disappeared. They may not know the meaning of the deity of Christ or be familiar with the doctrine of salvation by faith, but they’ve heard about the Rapture.

The word “rapture” doesn’t appear in the King James translation of the Bible, and until relatively recent times most Christians didn’t believe in a literal and physical Rapture of the Church.

Modern day evangelicals have a Holy Ghost orgasm every time war breaks out, an earthquake kills thousands or a pandemic devastates a population, because they believe these are the signs of the end times that were prophesized to take place before the return of Jesus.

They don’t have any sympathy for the suffering of unbelievers, and they consider anyone who isn’t an evangelical an unbeliever, including not only Muslims and Jews but Catholics and mainline Protestants.

If evangelicals believe in crappy science fiction nonsense like the Rapture, we shouldn’t be surprised they believe in crazy conspiracy theories like the Big Lie or that the world is controlled by a cabal of Satan worshipping pedophiles.

Evangelicals believe that after they’re raptured life on Earth will be hell. But the fact is that life would be paradise without the homophobic, misogynist, vengeful, hateful and intolerant a-holes. The horrors of the Tribulation would be a small price to pay for getting rid of evangelicals. 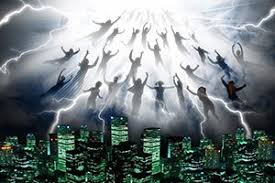 “According to conspiracy theorists, codes in the Bible suggest the end of the world is imminent, with Earth set to be destroyed on April 23.

One theory suggests the end times dates back to astrological constellations appearing on November 23, matching the book of Revelation 12:1-2.

The passage signals the start of the Rapture and the second coming of Jesus Christ.

The passage 12:1-2 reads: `And a great sign appeared in heaven: a woman clothed with the sun, with the moon under her feet, and on her head a crown of 12 stars. She was pregnant and was crying out in birth pains and the agony of giving birth.`”

With President Donald Trump threatening on Twitter to strike Syria with Tomahawk missiles, and news anchors discussing if the president hired prostitutes to urinate on each other it certainly feels like we are living in the last days.

Christian theologian and author David Meade is making headlines for predicting that the Rapture will take place April 23, 2018.

But before you cash out your CD`s and live like a decadent billionaire before the world ends it`s important to keep these things in mind:

*The Bible warns us in Matthew 24.36: But of that day and hour knoweth no man, no, not the angels of heaven, but my Father only.

*”David Meade” is a pen name, the wack job conspiracy theorist doesn`t have the courage to use his real name.

*The end-time conspiracy theorist predicted that the planet Nibiru was going to collide with Earth on September 13, 2017. After his prediction failed, he revised the apocalypse to October 2017, and then November 2017.

Meade has repeatedly been wrong in predicting the Rapture, it`s worth noting that the Old Testament says that prophets who are wrong even one time should be killed:

Deuteronomy 18: 20: But the prophet, which shall presume to speak a word in my name, which I have not commanded him to speak, or that shall speak in the name of other gods, even that prophet shall die.

We`re not living under the Old Testament dispensation but we should put him to death 21st century style: Ridicule the wanker on social media until he kills himself.