President Joe Biden is 80-freaking-years-old and I don’t expect him to recite the Gettysburg Address or even the Pledge of Allegiance without the aid of a teleprompter.

But I do expect him to remember the name of the person he’s singing “Happy Birthday” to, especially during an event that’s being televised live.

“Well, my wife has a rule in my family, when it’s somebody’s birthday, sing ‘Happy Birthday,’” he said before he started singing to Martin Luther King III’s spouse.”

A flustered Biden mumbled something that sounded like “Lur-lurh” when it came time to mention her name. The birthday gal’s name is “Andrea Waters King”, and if the octogenarian president couldn’t remember her first name, he could have simply said, “Happy Birthday, Ms. King.”

The venue was festooned with signs commemorating Martin Luther King, only someone suffering from dementia wouldn’t have been prompted to say, “Happy Birthday, Ms. King.”

It’s OK for a resident in a nursing home to forget the name of the birthday gal, but when the president of the United States forgets the name of the person whose birthday is being celebrated, that’s a sign that he’s too old to hold any political office. 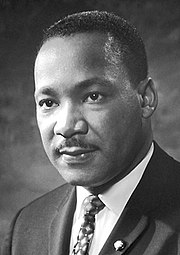 Legislation was signed in 1983 creating a federal holiday marking the birthday of Rev. Dr. Martin Luther King, Jr. Taking place each year on the third Monday in January, the MLK Day of Service is observed as a national day of service in honor of the tireless crusader for peace and justice.

Unfortunately, very few people who aren`t federal employees actually get the day off, but we should still honor the memory of MLK by serving others after we get off from work.

Donald Trump, the President of the United States, didn`t set an example for the people that he serves by helping build a house for Habitat for Humanity or by serving meals in a food kitchen, he was too busy playing golf with his millionaire pals.

Melania Trump on Monday sent out a tweet acknowledging Martin Luther King Jr.`s lifetime of service, but nobody was buying it.

Today we honor Dr. Martin Luther King Jr. & his service to this great country. I am honored to be First Lady of a nation that continually strives for equality & justice for all. #MLKDay

The nation may strive to create a more perfect union, but her husband`s racist rhetoric and policies are setting back our democracy decades.

If Melania really wanted to honor the memory of MLK she would poison her hubby`s covfefe.

I`d better forget the execrable Trumps if only for this holiday, so I will be in the proper state of mind to celebrate the birth of Martin Luther King, Jr.