Donald Trump’s chaotic and dysfunctional term is ending not with a whimper but with a bang that threatens to decimate the Republican party and destroy our constitutional democracy.

The waning days of the Trump regime encapsulates and epitomizes all the corrupt excess of his four years in power.

Did anyone really expect the unhinged narcissist to concede with humility and grace after suffering a popular vote and electoral college landslide defeat to Joe Biden?

In a trademark bombshell Trump torpedoed the fragile bipartisan pandemic relief bill that took months to craft. The mammoth legislation was put together without any input from him, but that didn’t stop him from blowing it up with demands that are unacceptable to Republicans in the House and the Senate.

Trump inner circle is compromised of grifters, conspiracy theorists and sideshow freaks like Rudy Giuliani. Everyone else is excluded from his circle jerk, and they are wanking away with abandon and giving the middle finger to the American public.

Let’s hope and pray that Joe Biden will be able to clean and disinfect the unholy mess these wankers are leaving behind.

How did the evangelical hero, Donald Trump, spend Good Friday? Did he meditate on the resurrection of Jesus Christ as an inspiration for his own spiritual rebirth in the wake of the publication of the redacted version of the Mueller Report that painted a damning picture of the mendacity, corruption and pettiness that’s endemic in his administration? Obviously that’s a rhetorical question,

.agreed to testify, it was not necessary for me to respond to statements made in the “Report” about me, some of which are total bullshit & only given to make the other person look good (or me to look bad). This was an Illegally Started Hoax that never should have happened.

Leaving aside the use of an expletive at a time of the year when a Christian’s speech should be more circumspect than usual, Trump’s tweet is well, bullshit. The Mueller probe wasn’t illegally started, it wasn’t a hoax, and it wasn’t total bullshit.

This is why nobody but the @DNC circle jerk takes this seriously anymore.  That front page is a disgrace but in its disgrace, many wake up. Thank God for @realDonaldTrump for waking millions of Americans up to the truth about the @washingtonpost 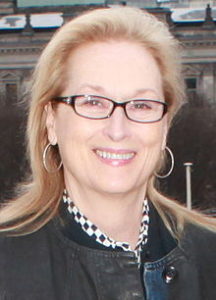 By now everyone has heard about, if not seen live on NBC or on YouTube, Meryl Streep`s speech at the Golden Globes where she railed against Donald Trump, and specifically criticized him for allegedly mocking a disabled reporter.

Streep who is as renowned for her leftist politics as she is for her acting acumen was bathed with praise and adoration by the audience at the Golden Globes event. It`s not surprising that the Hollywood crowd, which was probably 99.99% liberal, experienced a collective orgasm during her speech, but now everybody from all ends of the political spectrum is weighing in.

Donald Trump of course reacted almost immediately on Twitter describing Streep as “one of the most over-rated actresses in Hollywood,” and “a Hillary flunky.” He also denied for the hundredth time that he mocked New York Times reporter Serge F. Kovaleski`s disability.

Streep is one of the most acclaimed actresses in Hollywood, she` been nominated for 19 Academy Awards, won three Oscars, and a truckload of other awards. But it`s also true that she`s the most overrated actress in Hollywood, if she defecated on film, critics would praise her form and technique, and give her a special Academy Award for the best bowel movement in the history of cinema.

Streep is a Hillary Flunky, she heaped praise on Hillary at the Democratic convention, and she most likely delivered an Oscar-worthy crying performance when Hillary lost.

Streep is the reason why a know-nothing clown won the presidency — regular Americans are sick and tired of elitist privileged celebs who live in an insular world looking down on us for not embracing their liberal Gospel.

I will join Meryl Streep, Hillary Clinton, Elizabeth Warren and Rosie O`Donnell in a circle jerk, before I take Streep`s blathering seriously.