President Donald Trump declined to commit to accepting the election results during his infamous interview with Chris Wallace on Fox News Sunday.

In fact, Trump is already laying down the groundwork for remaining in office if he loses to Joe Biden, by constantly peddling the conspiracy theory that mail-in voting during a pandemic will result in massive voter fraud.

Trump has the chutzpah to claim to believe in this conspiracy theory even though he, members of his immediate family and many of his most prominent supporters have voted by mail.

Speaker of the House Nancy Pelosi is having none of it, she warned that Trump should prepare to be fumigated out of the White House if he refuses to leave.

“Whether he knows it yet or not, he will be leaving,” Pelosi said on MSNBC’s Morning Joe. Just because he might not want to move out of the White House doesn’t mean we won’t have an inauguration ceremony to inaugurate a duly elected president of the United States.”

Some of Trump’s hotels and resorts have suffered bedbug infestations, and no doubt the White House will need to be fumigated after four years of Trump and his rats and sycophants living and working there.

I would also suggest an exorcism to cleanse the People’s House from the sins of racism, misogyny and homophobia.

Our long national nightmare will soon be over, Joe Biden will win in a landslide and Trump is going to be kicked to the curb.

“Members of the University of Alabama football team prayed with President Donald Trump on Tuesday afternoon as they made their ceremonial visit to the White House as winners of the 2017-2018 College Football Playoff National Championship.

During the Trump presidency, visits by championship sports teams to the White House have seemingly been marred by the fact that some high-profile athletes haven`t made the trip to the executive mansion to protest the president.

However, the Crimson Tide`s visit to the White House on Tuesday to celebrate their 26-23 Jan. 8 victory over the University of Georgia could likely be remembered for the fact that a handful of players huddled around the president to pray for him and the administration.

According to WBRC sports reporter Christina Chambers, the prayer was the idea of Alabama punter JK Scott. Chambers reports that when the punter went to shake Trump`s hand following his ceremony, he asked the president if he could pray with him.”

Instead of visiting the White House to celebrate their 2017 NBA championship, the Golden State Warriors toured the National Museum of African-American History and Culture with local Washington students.

Championship teams should follow the example of the Golden State Warriors and turn down invitations to visit the White House. However I`m not surprised that the University of Alabama football team made their ceremonial visit to the White House as winners of the 2017-2018 College Football Playoff National Championship. After all the state of Alabama is a Mecca for rednecks; Alabamians love football, pedophile senatorial candidates, and of course Donald Trump.

Not only did the Alabama football team visit the White House, but they huddled around the president, laid hands on him, and prayed for the racist bastard.

It would have been OK if players prayed for Trump to repent and turn away from his wicked ways. But I`m sure these wankers prayed a generic Christian prayer asking God to bless Trump and give him wisdom. Such bullcrap!

I`m going to pray myself, that next year the Crimson Tide won`t win the national championship.

It`s a longstanding tradition for the children of the White House correspondents to visit the Oval Office for Halloween festivities.

Reporters who cover the White House are better acquainted than the rest of us with the corruption that permeates the ultimate seat of power.

Now that Donald Trump occupies the White House it`s the epicenter of evil in the world. Why in the name of everything that`s decent, holy, and pure would reporters bring their innocent children to the White House to meet Trump?

I would look more kindly on parents who offered their children as a sacrifice to Molech than on parents who took their kids to the White House to meet Trump.

Is it any wonder that the press has a lower approval rating than the most corrupt, evil and venial president in the history of the United States?

Did Trump interact with the children by dispensing pearls of wisdom and hugging them?

Bitch get real. Here`s some of the things he told them:

These are beautiful, wonderful children. You gonna grow up to be like your parents? Mmm, don`t answer. That could only get me in trouble, that question.

You have no weight problems. That`s the good news, right?

I cannot believe the media produced such beautiful children.

Any person with a modicum of integrity would turn down an invitation to meet Trump, and he sure as hell wouldn`t drag his children to the White House to meet the monster. 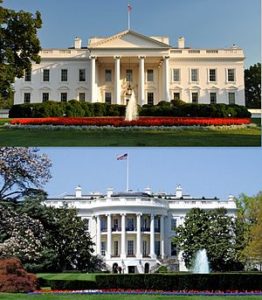 “The U.S. Secret Service says a person is under arrest after climbing a fence and getting onto the south grounds of the White House.

The breach happened at 11:38 p.m. Friday. President Donald Trump was at the White House.

The agency says the individual – whom it did not identify – was arrested without further incident. No hazardous materials were found during a search of a backpack the individual carried.”

Instead of building a border wall between Mexico and the United States that would cost billions and severely strain our relationship with our good neighbor, President Trump should spend a few millions to build a solid wall around the White House grounds.

Anyone can scale the fence around the White House and gain instant notoriety and dominate a news cycle, and indeed it`s not an uncommon occurrence.

But post-9/11 this is unacceptable, the trespasser who was arrested after he breached security didn`t have a bomb or weapons in his backpack, but the next intruder might be a suicide bomber.

The intruder jumped the fence without being observed, he wasn`t detected until he was approached by a uniformed Secret Service officer. If an individual jumped a fence protecting the mansion of a movie star he would immediately be detected and grabbed by bodyguards, Trump may be a reality TV star, but he`s also the Leader of the Free World and the security at the White House is a joke.

If a suicide bomber jumped the White House fence he probably wouldn`t be able to get close enough to the president to kill him, but if he managed to blow himself up inside the grounds, the harm to the prestige and reputation of the United States would be incalculable.

“Whether President Donald Trump wears a bathrobe while watching TV in the White House has been a bone of contention this week.

On Tuesday, his press secretary Sean Spicer vehemently dismissed a report that first surfaced in a New York Times article as `fake news,` adding that he didn`t think Trump even owned a bathrobe.

What is clear, however, is that Trump has worn a bathrobe on at least one occasion in the past, as this old photograph shows.”

According to reporting by the New York Times (an anti-Trump publication) president Trump has a penchant for lounging around in the White House in a bathrobe. The obvious intention is to portray Trump as a slacker, he may be intemperate, racist, and childlike, but he`s not lazy. Trump is the hardest working man in politics, he sleeps only about four hours at night, and he probably fires off a couple of tweets during his sleep.

The New York Times would be well-advised to put a screeching halt to their vendetta against Trump, they are succeeding only in destroying their legitimacy.

In his younger years when Trump styled himself a playboy in the mold of Hugh Hefner, he probably owned dozens of designer bathrobes, but those days are behind him.

However I`m enjoying the memes depicting the blowhard billionaire clad in a bathrobe, click the link at the bottom of this page to see for yourself.