Jerry Falwell Jr’s sexual hijinks have garnered much of the attention in his epic fall from grace. It’s not surprising the press would focus their attention on the infamous Instagram pic of the Liberty University (LU) president on a yacht with his pants unzipped embracing a beautiful young woman whose pants are similarly unzipped.  It wasn’t just the tabloids but the mainstream media as well that gave saturation coverage to the scintillating tale of the young pool boy who slept with Falwell’s spouse in a hotel room, while Falwell sat ogling in the corner. A pool boy, a cuckold evangelical leader, and his promiscuous wife, impossible to ignore.

But Falwell’s interesting sexual life may have been the least of his sins. Falwell was rewarded with a $10 million severance package, after years of using LU as a cash cow. He even had the audacity to put his two sons and their wives on the payroll.

Liberty tells all of its students that sex should only be between a man and his wife, and that sobriety should be practiced. A student will be disciplined for a single innocent kiss or having one beer at a party.

A few days after resigning as Liberty University’s president, Falwell was injured after falling down the stairs after drinking, according to a 911 call. Becki admitted to the dispatcher that Falwell had been drinking, and the first responders noted that there were several empty liquor bottles in the vicinity of his fall.

This physical fall perfectly illustrates Falwell’s fall from grace, it was decades of financial irregularities, sexual escapades and drunkenness that culminated with Falwell helpless at the bottom of the stairs bleeding and, crying out for help.

The last time Vice President Mike Pence spoke at Liberty University, he used the backdrop of one of the world’s largest Christian schools to vouch for candidate Donald Trump’s faith credentials during the 2016 campaign.

When Pence returned to the school Saturday to deliver the commencement address, his remarks were more personal.

Pence, who has been facing criticisms of his own religious views recently, warned graduates that they have to stay strong against the challenges they’ll get from Hollywood, the media and the secular left.

‘Throughout most of American history, it’s been pretty easy to call yourself Christian,’ Pence said. ‘It didn’t even occur to people that you might be shunned or ridiculed for defending the teachings of the Bible. But things are different now.’

Jerry Falwell Jr., the president of Liberty University, was the first prominent evangelical to endorse the presidential candidacy of Donald Trump.

Ever since Trump and his lackeys have maintained a close relationship with Falwell and his university, so it wasn’t surprising that Vice President Mike Pence made a pilgrimage to the Mecca of White Evangelicalism to deliver the commencement address.

I beseech my readers to be like Jesus and condemn the anti-Christian spirit of Trump, Pence and other reprobated white evangelicals. 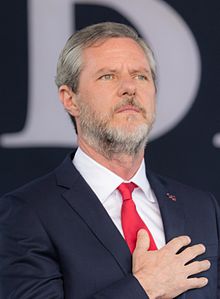 In the wake of President Donald Trump`s stunning Charlottesville remarks in which he embraced White Nationalists every section of our society has repudiated his blatant racism.

Trump disbanded his Manufacturing Council & Strategy & Policy Forum after a rash of defections by business leaders.

Only evangelical leaders, who you`d think would be the first ones to condemn hatred, have remained silent.

Only one religious leader has stepped down from Donald Trump`s evangelical advisory board. Megachurch pastor A.R Bernard announced on Twitter Friday that “it became obvious that there was a deepening conflict in values between myself and the administration.”

In January 2016, Jerry Falwell Jr. became one of the earliest evangelical leaders to endorse the degenerate billionaire candidate, and he has remained steadfast in support of Trump through every scandal, every intemperate tweet and every contentious press conference.

After Trump`s outrageous, controversial and racist remarks about the Charlottesville White Nationalists` protest this is what Falwell tweeted:

We expect our religious leaders to condemn racism and other moral diseases, and to urge their followers and indeed the entire nation to form a more perfect union.

Jerry Falwell Jr. may be a moral coward, but I take heart in the fact that a group of Liberty University (LU) alumni has condemned him for his continued alignment with Trump. Some LU graduates have vowed to return their diplomas to register their disapproval.

I urge my evangelical friends to join the rest of society in condemning hate speech, racism and bigotry.

President Donald Trump delivered the commencement address at Liberty University which is located about three miles from my home. I wouldn`t drive three yards to hear Trump speak, but I did watch the spectacle on TV.

Before his big speech Trump was presented with an honorary degree from Liberty University, which carries as much weight as a degree from Trump University.

The president opened his first commencement speech at the evangelical university on Saturday by talking about the size of penis.

Just kidding, Trump managed to refrain from making any vulgar comments lest he offend the sensibilities of the conservative Christian school. Funny how evangelicals aren`t offended by Trump`s health plan that renders health care unaffordable for the elderly and the poor, and his economic policies that punish the poor and give tax breaks to the filthy rich, but they pitch a fit when comedians use obscenities to describe Trump. But I digress …

Trump did start his speech by bragging about the size of the crowd:

“I`m thrilled to be back at Liberty University. I`ve been here, this is now my third time, and we love setting records, right? We always set records. We have to set records, we have no choice.”

He again referred to the size of the crowd later in his speech, saying: “This is a beautiful stadium, and it`s packed. I`m so happy about that.”

Trump`s speech was unremarkable: Some platitudes, a few Trumpisms, and a compliment or two for Liberty University President Jerry Falwell Jr. as a reward for his early endorsement.

I could have delivered a speech of equal style and substance – when I was in elementary school. Damn Falwell for shaming Lynchburg, and damn Trump for shaming our country.