White evangelicals are unconcerned that Trump isn’t a true Republican, they turn a blind eye to his moral failings, and they don’t lose any sleep over his unconstitutional polices, but his shocking treatment of the Kurds, is finally making them have second thoughts about their religious devotion to their orange Messiah.

Reportedly, Trump has sought counsel from prominent evangelical leaders on how to protect his unholy alliance with conservative Christians amid criticism over his withdrawal of American troops from Syria.

These evangelical leaders, whose allegiance isn’t to the Bible or the American Constitution, but to their right wing platform which includes blind support for the state of Israel have advised him that his Syrian policy poses an existential threat to Israel.

Trump has no loyalty to anyone or anything except himself, he’s remained loyal to white evangelicals only because he can’t win reelection without their unwavering support. But evangelicals are wondering: if Trump can abandon, betray and leave the Kurds to the tender mercies of the brutal Turkish army, what’s to say their precious Israel won’t be the next ally to be thrown under the bus?

Evangelicals don’t lose any sleep because Trump is turning our democracy into a fascist state, but they lay awake at night worried that the mercurial and impulsive Trump may suddenly reverse course and abandon Israel. And if America turns her back on Israel, and if the Jewish state is destroyed that means that their interpretation of the Bible is wrong, and everything they believe in is wrong.

Evangelicals need to wake the hell up, when the President of the United States and the Leader of the Free World is a corrupt, racist and vulgar sociopath it may lead to genocide of the Kurds, the destruction of Israel and the disintegration of our democracy. 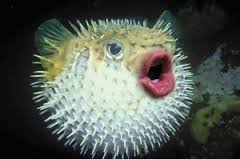 “A Donald Trump-themed restaurant-one that`s not owned by the president-elect himself-just opened in the heart of Iraqi Kurdistan. Called Trump Fish, its specialty is carp, which comes grilled or fried.

The Trump-themed restaurant is a homage, not a mockery, Kurds love the blowhard billionaire almost as much as the Russians, because of his promises to arm Kurdish forces.

I have better choices for the specialty of the house:

This would be perfect, an orange fish that belongs to the slimeball family. What is Trump if not an orange slimeball?

This toxic fish defends itself by filling its elastic stomach with water (or air when outside water) until it`s much larger and imposing. Another perfect choice — Trump is toxic and full of hot air.

A marine creature that doesn`t have a brain or a sexual organ? Perfect description of micro-penis Trump.