“Sometimes I think Whats-his-name is a kind of vampire and someone needs to drive a stake through his heart, so we can #breatheagain.  Of course, he’s driven a lot of steak through his own heart tho, so…fingers crossed!”

Bette Midler regularly takes to Twitter to express her disdain and contempt for the racist-in-chief, excoriating and eviscerating him in a manner that would make even Jack the Ripper squeamish.

The Divine Miss M can’t even bear to utter his name, referring to the unspeakable evil as “What’s his name.” I can understand her reluctance to say his name, summoning a demon by uttering his name may open the portal to hell.

The short-fingered vulgarian is a psychic vampire, an evil entity who sucks the life force out of everyone in his orbit. Nobody leaves his administration with his reputation and dignity intact. The White House is littered with the dried-out husks of men and women who were once politicians with at least a modicum of integrity.

But most of the lifeless husks are in churches where white evangelicals who have been fed a diet of inflammatory sermons that defame and demonize gays, immigrants and people of color, rendered them predisposed to fall under the spell of a racist demagogue.

The billionaire buffoon is bloated with the toxic life force of racist white evangelicals and gutless Republican leaders, and someone needs to drive a stake through his shriveled heart. 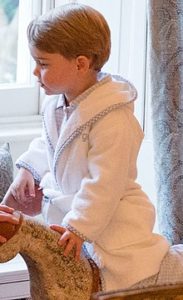 “A conservative British politician has lashed out at an LGBT news site for declaring their country`s future king a `gay icon.`

PinkNews used a photo of Prince George clutching his face while visiting a German helicopter compound with his father alongside an article headlined `People think Prince George looks fabulous in this new photo.`

`Prince George has become a gay icon overnight – at least, that`s what some people – sorry, his subjects – are saying on Twitter` the article began before quoting a series of social media posts about his supposedly feminine gesture.”

Some conservatives reacted in shock to the gay publication`s characterization of 4-year-old Prince George as a gay icon, they claim that the young royal is being sexualized.

Bullocks! Judy Garland, Barbra Streisand, Bette Midler, Cher, Madonna and Lady Gaga are all prominent gay icons, and there isn`t a gay man alive who fantasizes about these women as sexual objects.

To brand Prince George as a gay icon isn`t sexualizing him, it simply means that he embodies the gay aesthetic.

I have a finely tuned gaydar, in fact I have never been wrong when I guessed a celeb`s sexual orientation (male and female) sometimes decades before they came out of the closet.

The photograph of Prince George clutching his slightly tilted to the side face while wearing blue shorts is the gayest thing I have seen in my lifetime. Take is from someone who is infallible when it comes to guessing people`s sexual orientation, there is a 99.99 percent chance that little George will grow up to be gayer than Liberace.

The PinkNews article was tongue-in-cheek, conservative bitches need to get a clue.