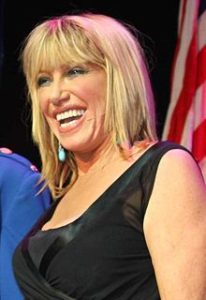 “Suzanne Somers is saying it loud and proud … she`s a huge fan of President Trump, and she also believes shes committing career suicide by saying that.”

Somers wasn`t a gifted thespian, but in the late 1970`s she jiggled her boobs and butt to superstardom as Chrissy Snow on Three`s Company.

In the 1990`s she kept in the spotlight as a spokeswoman for the Thighmaster. The Thighmaster was a piece of exercise equipment that is squeezed between one`s thighs. It`s doubtful the contraption did anything for your thighs, but it was slightly entertaining to watch an ageing actress open and close her legs as if she was attempting to crack a nut.

In the 2000`s Somers wrote a series of best-selling self-help books, including Ageless: The Naked Truth About Bioidentical Hormones, about bioidentical hormone replacement therapy. These books are nothing but quackery, and they sold only because they featured Somers silicon-enhanced face on the covers.