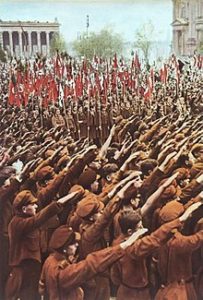 “A man who filmed a pet dog giving Nazi salutes before putting the footage on YouTube has been convicted of committing a hate crime.

Mark Meechan, 30, recorded his girlfriend`s pug, Buddha, responding to statements such as `gas the Jews` and `Sieg Heil` by raising its paw.

But police were alerted and he was arrested for allegedly committing a hate crime.

The original clip had been viewed more than three million times on YouTube.”

In America there is a fascist mindset, especially in academia, that considers not just Nazi ideology but any conservative viewpoint hate speech that shouldn`t be protected under the First Amendment.

I`m more liberal than conservative, but I believe that even controversial conservative or libertarian trolls like Milo Yiannopoulos and Ann Coulter have a constitutionally-protected right to lecture in universities.

I find it abhorrent when televangelists demonize gays, politicians sing the praises of the NRA, and pundits promulgate the lie that Donald Trump is a great president, but all of these views deserve to be heard in a university campus, where diversity of thought should be the default mode of education.

In the UK and Europe we see what happens when unpopular speech is branded as “hate speech” and is treated as a crime.

To post a video on YouTube depicting a dog responding to statements such as “gas the Jews” and “Seig Heil” by raising its paw in a Nazi salute, is ridiculous, abhorrent, disgusting, and incomprehensibly cruel to the victims of Hitler`s Germany, but it shouldn`t be a crime.

A democracy will survive a professional agitator like Milo speaking in a university, and it will survive dozens of racist videos posted on YouTube.

A democracy has really gone to the dogs when a wanker is convicted for posting a silly, but patently racist video.