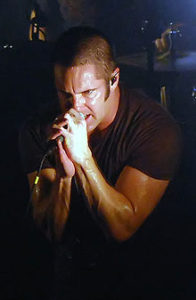 In an interview with the Village Voice Trent Reznor didn`t mince words in describing Donald Trump:

“The president of the United States is a complete fucking moron. That`s what gets me the most – that he`s this vulgar, grotesque dope, everything I hate in people.”

Reznor may be dismissed as just a rock and roller by people who don`t care for his liberal politics, but the songwriter of “Hurt,” one of the most meaningful songs ever written, deserves to be heard on diverse and sundry subjects.

When describing a piece of shi* like Trump a writer doesn`t need to break open his thesaurus or consult “The Elements of Style.”

Trump is a “complete moron,” there`s no spark of intelligence or wisdom that he`s repressing, and he can always be counted on to behave in a moronic fashion.

Trump is a “fuc*ing moron,” there are some morons whose stupidity is somewhat deflected by their good nature, and then there are fuc*ing morons who are as evil as they are stupid.

Trump is a vulgar, grotesque, fuc*ing moron, and he doesn`t have any socially redeeming values.

I`m going to play a Nine Inch Nails album, and try to forget, for a moment, that Trump is president of the United States.