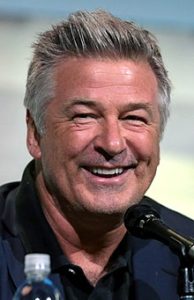 “Alec Baldwin has been caught with his foot in his mouth once again.

`I don`t know how to say this and I don`t want to get it wrong either, because everything is a minefield of bombs going off,` Baldwin told The Hollywood Reporter in an interview published Tuesday. `But ever since I played Trump, black people love me. They love me.`”

Alec Baldwin`s belligerent personality isn`t exactly endearing, and I hate making generalizations but most people, be they white, black, brown or yellow, can`t stand the creep.

I think Baldwin has been impersonating Trump for too long, his remark sounds like something Trump would say, except the racist billionaire would have boasted, “the blacks love me.”

SNL has a decidedly non-diverse cast and its viewing audience is predominantly white and male, therefore it`s no surprise that Baldwin`s impersonation is a hit.

But if homeboy took his act on the road, say to the Apollo Theatre, hecklers would shout: Nigga please, get off the stage with your tired old impersonation.