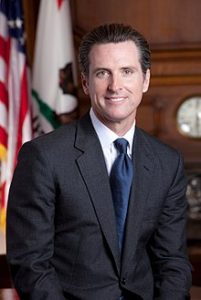 `Democrats want to give welfare and free health care to illegal aliens,` Trump said. `How about this clown in California who`s running for governor? He wants open borders and then he wants to give them health care, education, everything.`

Newsom fired back on Twitter by comparing Trump to Pennywise, the terrifying clown in Stephen King`s `It.`:

Interesting description coming from the guy who is literally locking up kids like Pennywise.”

Donald Trump calling a politician a clown is like Mike Tyson berating a friend for giving his girlfriend a hickey.

When I see Trump with his sphincter-shaped mouth, urine-colored cotton candy hair, and his orange complexion, I think this is what a clown must look like if Satan operated a circus.

Everything about Newsom from his movie star good looks to his eloquence to his command of the issues is the antithesis of a clown, and everything about Trump from his absurd appearance to his incoherent babbling to his ignorance of foreign and domestic policy is the epitome of a clown.

Newsom is spot on in comparing Trump to Pennywise the clown, Trump locks up immigrant children in concentration camps and Pennywise locks up children in the bowels of the Earth.

Pennywise emerges from the gutter every few decades to unleash evil, but hopefully Trump`s first term will be his only opportunity to unleash chaos. I doubt our democracy can survive a second term of Trump`s buffoonery, stupidity and just plain evil. 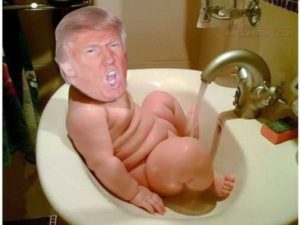 “In a surprise interview with Fox and Friends on Friday, President Donald Trump announced live that he wants his people to sit up at attention when he speaks – the same way North Koreans do for dictator Kim Jong Un.

During the interview, the subject of Trump`s recent Singapore summit with North Korean dictator Kim Jong Un arose. `He`s the head of a country. And I mean, he is the strong head,` Trump remarked. `Don`t let anyone think anything different. He speaks and his people sit up at attention. I want my people to do the same.`”

“He`s the head of a country. And I mean, he is the strong head. Don`t let anyone think different.”

Nobody thinks different. Everyone knows that Kim Jong-un isn`t just a “strong head,” but a ruthless tyrant who tortures, imprisons and starves his own people. Trump is the only one who thinks that the North Korean dictator is a “smart guy” and a “very talented man” who “loves his people.”

“He speaks and his people sit up at attention.”

Of course the terrorized citizens sit up at attention when their Dear Leader speaks, he sentenced people who didn`t cry at the funeral of his father Kim Jong-il to long sentences in a labor camp. But we live in a democracy, not in a dictatorship, and we aren`t about to sit up at attention whenever Trump babbles incoherently. A president who tramples on the Constitution, runs roughshod over the other co-equal branches of government, and condones racism and misogyny doesn`t deserve any respect.

“I want my people to do the same.”

Trump isn`t my president, and we aren`t his people. We are citizens in a democracy, not subjects in a monarchy or slaves in a dictatorship.

Trump may or may not have been kidding, but one thing is clear his so-called joke reveals his demented personality that craves adulation. We understand humor, and we understand that Trump is the biggest joke in the world.

The drawing appears to show Pence dressed in a robe, watching over a fly positioned on his right hand.

`I hope they are watching … They`ll see,` reads the text accompanying text. `They`ll see and they`ll know, and they`ll say, `Why Mike Pence wouldn`t even harm a fly … `”

The quote is from the Alfred Hitchcock classic “Psycho,” a not so subtle hint that our Vice President is a dangerous psycho.

Norman Bates victims were guests of the infamous Bates Motel, but Pence`s victims is the entire population of the United States, especially if he succeeds Trump.

Carrey`s artwork is in black and white with the exception of Pence`s piercing green eyes, the eyes of a zealot. Pence is a well-known evangelical zealot, on a mission from God to persecute gays and lesbians, and oppress the poor and disenfranchised.

But when it comes to Psycho Mike Pence politics trumps religion, and he is a political zealot who will debase and humiliate himself in an effort to please his Messiah, Donald Trump.

I hope and pray that Robert Mueller`s investigation will culminate with the impeachment of Trump and Pence. We must not make the mistake of breathing a sigh of relief if Trump is impeached or forced to resign, if Psycho Pence is still in the picture.

“Donald and Melania Trump reportedly lead very separate lives within the White House – so much so that the couple do not share a bedroom within 1600 Pennsylvania Avenue, according to a recent profile of the first lady in the Washington Post.

But just how unusual is it for first couples to have separate sleeping quarters? Presidential experts tell PEOPLE it`s an arrangement the country hasn`t seen in more than forty years.

It`s no surprise that Donald and Melania Trump lead separate lives within the White House, remember she didn`t move into 1900 Pennsylvania Ave. until June 2017.

Can anyone blame the First Lady for not sharing a bedroom with her husband? Ladies, imagine if you can, sleeping in the same bad with the Donald, and waking up to the pervert gabbing your goodies with his freakishly small hands? Or having the Twitter bully wake you up at an ungodly hour in the morning because he couldn`t help himself from firing off a tweet to complain about Comey?

If Donald wants to sleep with his spouse he probably needs to go through Melania`s scheduler, and judging by the way she swats away his repulsive tiny hands in public, I doubt they do the nasty more than once a year.

When Melania moved into the White House she tweeted:

Looking forward to the memories we`ll make in our new home!

I bet they won`t be fond memories! Memories of Trump sitting in the toilet browsing Penthouse to see which nude model he should pursue? Memories of Trump ranting and raving, because he will never be as popular as Obama?

Melania get real, the only way you will make fond memories is if you kick the Orange degenerate to the curb!