ABBA, one of the most commercially successful acts in the history of popular music, is releasing its first new album since 1981, and going on tour.

I know what you’re thinking: It’s great that they’re releasing an album of new material, but the Swedish septuagenarians simply don’t have the stamina to sing for a couple of hours, let alone tour.

It wasn’t just the pulsating disco music that made ABBA a huge sensation in the 70’s, the Swedish supergroup were fashionistas, nobody rocked the cameltoe aesthetic like the ABBA divas.

I love me some ABBA, but I don’t want to see sexy (?) Swedish septuagenarians rock a cameltoe.

Relax, the ageing rockers will be performing digitally, not in person. The digital versions of ABBA were created via months of motion-capture and performance techniques with the four band members, and a team from Industrial Light & Magic. Supposedly, this technique is more realistic than holograms.

This dancing queen is planning on buying the forthcoming ABBA album “Voyage,” to be released November 5, and I might even attend one of their digital performances. 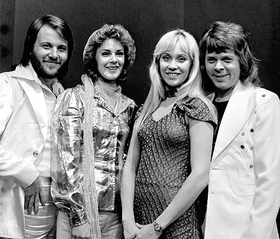 “Some 35 years after their split, the four original members of Abba announced today that they have recorded two new songs. One, `I Still Have Faith in You,` is set for release in December.

That song will be part of a `Virtual Abba` experience in collaboration with `American Idol` creator Simon Fuller first announced in 2016, and it will premiere, via digital versions of band members, on NBC and ABC at the end of this year. There are no details as yet about the second song.”

In a statement, the band wrote:

`The decision to go ahead with the exciting ABBA avatar tour project had an unexpected consequence. We all four felt that, after some 35 years, it could be fun to join forces again and go into the recording studio. So we did. And it was like time had stood still and that we only had been away on a short holiday. An extremely joyful experience!`”

I cannot emphasize how earth-shattering this proclamation is, imagine if you will the Pope declaring that a new book has been added to the canon of the New Testament or President Donald Trump and Congress announcing that a new amendment will be added to the Constitution making weed legal, and you will begin to understand the euphoria of ABBA fans.

Today many ABBA fans who weren`t alive in the 1970`s have an ironic appreciation for the Swedish superstars, but Baby Boomers worship them as cameltoe Messiahs of the music industry.

After 35 years ABBA will be releasing two new songs, but time doesn`t stand still, and the Second law of thermodynamics is still in full effect and entropy has taken its toll on pop music (Cardi B), the culture at large (Trumpism) and on the septuagenarian disco queens.

Thank God the new songs will be issued in virtual format with digital versions of the band members, seniors wearing tight-fitting outfits isn`t a good look.

The new songs will be released in December, this will be the happiest Christmas in decades for ABBA fans.