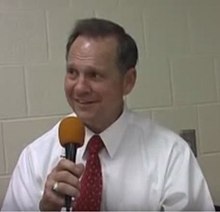 Roy Moore is a Republican, a man of God, and a pedophile.

As a young district attorney in the late 70s and early 80s, Moore trolled malls and schools, he was consumed with a holy passion to sow his righteous seed in underage girls. Moore never dated any schoolgirls without the permission of their mothers, woe unto anyone who attempts to besmirch his godly character.

Call me a godless liberal, but I believe the women who accuse Moore of sexual assault.

On Monday a fifth woman accused Moore of sexually assaulting her when she was just 16 years old.

Beverly Young Nelson, 53, said she met Moore in 1977 when he was a regular at Old Hickory House, where she worked as a waitress. He offered to drive her home one night, but instead he drove her to the back of the diner, groped her breasts and pushed her face toward his crotch. When she physically resisted he dumped her by the dumpster, and sped away.

Before attempting to rape the young girl Nelson signed her yearbook, the 30-year-old Moore wrote: To a sweeter more beautiful girl I could not say Merry Christmas. Christmas 1977. Love, Roy Moore, D.A.

Everyone, male and female, can relate to Nelson`s story. I worked every summer during high school, and one year I worked in a diner as a busboy.

I remember how much it meant to have all of my classmates sign my yearbook, if a local dignitary had signed my yearbook it would have meant the world to me.

But what kind of a sick twisted 30-year-old fuc* would sign a young girl`s yearbook?

The creep wrote “D.A” or District Attorney after his name, he probably knew that the Spirit was going to come upon him and he would try to rape her, and he was reminding her that he was the law in their neck of the woods.

I`m not the sentimental type and I didn`t keep any of my yearbooks, but most people, especially women, keep theirs. For the rest of her life Nelson will be reminded that she was sexually assaulted every time she picks up her yearbook.

Roy Moore should immediately step down, he is an abomination. How would I like to see this story end? A hero takes a dull knife, and the wretched pervert sings soprano for the rest of his miserable life.