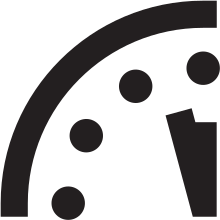 “The keepers of the Doomsday Clock have moved the symbolic countdown to potential global catastrophe 30 seconds closer to midnight based on President Donald Trump`s comments on nuclear weapons and climate change.

The Bulletin of the Atomic Scientists, in a statement accompanying the move Thursday, cited wavering public confidence in the democratic institutions required to deal with major world threats.

The Doomsday Clock now stands at 2 minutes 30 seconds to midnight, the closest it has been since the 1950s.”

I concur with the keepers of the Doomsday Clock that nuclear proliferation is an existential threat to humanity, but climate change is only a threat to Al Gore`s bank accounts.The more scientists speak truth to power and debunk the climate change hoax, the more money is siphoned from Gore`s substantial holdings.

We are eons from Reagan`s Morning in America, the midnight hour is quickly approaching thanks to Donald J. Trump. The president`s rants and ravings, usually conveyed on Twitter, could very well spark a global conflagration.

If Trump can be persuaded to cancel his Twitter feed the Doomsday Clock can be moved back to 3 minutes to midnight.

The world is going to end not with a bang or a whimper, but with a tweet.