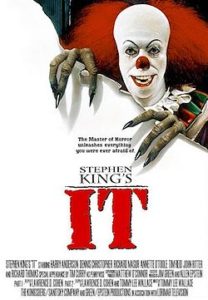 “A Texas doughnut shop employed the help of a scary clown to make deliveries for customers looking to creep out their friends or loved ones.

The Frisco-based Hurts Donut shop shared photos of the menacing clown, reminiscent of Pennywise from Stephen King`s It, who would be delivering doughnuts for two days of early Halloween mischief.

I love horror flicks but I haven`t seen Stephen King`s “IT” because I`m terrified of clowns in general, and Pennywise in particular.

I hope Hurts Donut shop has liability insurance up the wazoo, because if Pennywise shows up at a homeowner`s door with a bag of donuts he`s going to end up with more holes than his donuts.

I do love me some donuts though, right after I dispatch the Pennywise wannabe to hell, I`d grab his bag of donuts.

Since Halloween is right around the corner let me take this opportunity to beg parents not to dress their children like clowns, they may not make it home in one piece.